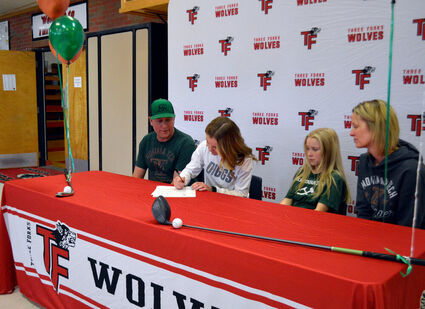 One of the best golfers in Class B, Three Forks senior Taylor Raffety, is continuing her career at the collegiate level.

Shortly before signing at a special ceremony at the high school, Raffety said is very excited to play for the Ore Diggers and the new experience.

Raffety chose to sign with Tech because it was close to home and added they have a roster wholly made up of players from Montana.

"I am going to enjoy it and do the best I can," she said.

After being an integral part of a Divisional champion team in 2021, Raffety has lofty goals for the team in 2021. Raffety said she not only wants to help lead the team to another Divisional title, but also has the goal of them bringing home a state championship.

Three Forks Head Coach Aaron Harkins said it has been an absolute privilege to have a competitor like Taylor during the 2019, 2021, and 2022 seasons (the 2020 season was canceled).

"Taylor has been and will be a golfer that never settles for mediocre, but rather strives for greatness in everything she does. Although there have been numerous great golfers and competitors come through the Three Forks program throughout the years, Taylor is extra special to me as I have been lucky to have a front-row seat as head coach for all three years of her high school career," said Harkins. "From a timid freshman to now a stellar senior, I wish Taylor all the best, and I know that she will be just as driven and dedicated in her collegiate career as she has been in her HS career. Best of luck, Taylor."

Lynch said only about five percent of high school student-athletes get the opportunity to compete on the collegiate level, and the number is probably even less for golf.