Three Forks Tennis had a great weekend at the Choteau Invitational despite the blistering heat on Friday and the freezing winds on Saturday. We played single Pro set six matches without ads to keep all of the teams playing throughout Friday. Friday evening, we got on the courts under the lights and played some new games and drills with the Choteau team. Then Saturday the weather got ugly, so we delayed our start time and played shortened four point games just to get teams out despite the wind.

Meskimen had two losses against Conrad and Jefferson and two wins against Conrad and Great Falls Central. She lost one singles match on Saturday against Fairfield and played a doubles match with Kotter narrowly losing their set to number one Fort Benton's Sammy Viellleux and Ashley Wang in an impressive matchup with so many great target hits and some strategic court movement.

Kotter had three losses against Chinook, Fairfield and Jefferson and a win against Conrad. Ali also played three doubles matches with Jacqueline Rollyson and Sophie Meskimen in Saturday's short game play against Simms and Fort Benton. Ali was key to helping the team mix up some doubles matchups this weekend and even won a Hot-Shot award for putting away two overhead slams in the same game. Thanks Ali.

Rollyson had two wins against Great Falls Central and Fort Benton. She also competed as a doubles partner with both Williams and Kotter against Fairfield and Simms. We appreciate both Jackie and Ali's versatility

Williams played five total match ups with her doubles partner Griffiths including a win against Jefferson and Fairfield. The duo also took on Chinook's Cecerle & Pitkanen but were unable to take them down. Saturday Maddie and Karin took on two shortened matches against Simms and Fort Benton that resulted in a single few game wins. These two are working well as a team and are looking to improve their net games and slices this season.

Griffiths played five games throughout the weekend with partner Williams including an impressive win over Jefferson's Shayna Williams and Ida Kalderon and win over Kamree Pearson and Madelena Preston. Maddie is working hard with her partner to learn each other's style of play. 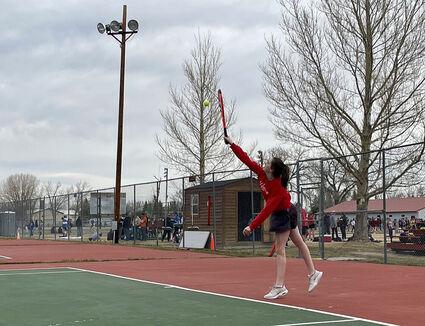 Warden and Deriana recorded a doubles team win against Great Falls Central and a really impressive game against Fairfield's Quin Christensen & Kamree Pearson that ended in a 9-11 tiebreaker loss. Some of the most impressive game play this weekend came from this duo as they are learning each other's strengths. They also got some great game play against Simms, losing in four, and they will be looking forward to a rematch when they meet again at the Simms Invitational April 22 to23 in Great Falls.

Overall, I am impressed with the work they each put in and the very long days in challenging weather. We are looking forward to playing Jefferson again this week and heading to Billings to play Forsyth and Red Lodge and then driving to Great Falls for another invitational after Easter.