The Montana Spring weather showed up once again for the Manhattan Christian Invitational at Cottonwood Hills golf club on the 19th with the golfers playing through a few hefty snow flurries before the weather decided to cooperate.  At the end of the day, Three Forks faired really well.  As a team we had four golfers post their personal best scores which is always thrilling for the players and coaches.  On the girls' side, Taylor Raffety led the way with an 87 (T-2) followed closely by Halee Wilson who came in 7th with a 96.  Lydia Kluin who came in 13th overall shot her personal best of a 104. Ari Judd and Brooklynn Hossfeld both finished in the top 15 as well.  The girls are definitely trending in the right direction so we will continue to practice hard and keep knocking a few shots off here and there to better our individual and team scores with the divisional tournament only a few weeks away.  (The girls shot a 392 as a team and came in second to the Manhattan Christian Eagles). 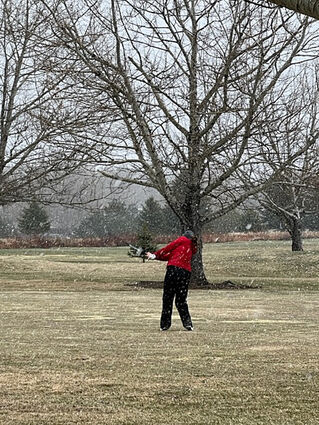 On the boys' side, there was a mix of some great and not-so-great rounds. Dylan Kamps (82, T-4) and Walker Page 84 (9th) both shot career-low scores and were very pleased with their performance on a chilly day at Cottonwood.  Morgan Karn, in his first varsity tournament, came out and represented us well firing a 99.  Austin Allen and Rhett Violett were a little off, but that happens.  Golf is a hard game and anyone who has played it knows that there will be some up days and some down days during a season.  The boys finished fourth and will look to work out some kinks in preparation for our next tournament that takes place in Missoula on April 26th and 27th.