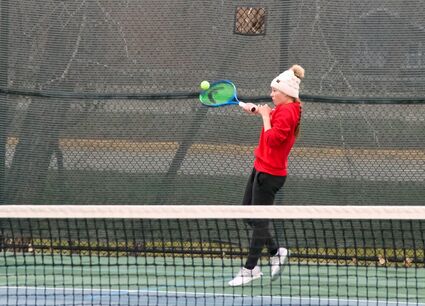 Ali Kotter returns a shot in doubles action against Jefferson High at the Simms Invitational. Photo by Eliza McLaughlin

It was a great week of results for the Three Forks High School tennis team.

Wolves Head Coach Janna Lauver said it was a beautiful and successful day of tennis last Tuesday in Billings, with the team able to get a Three Forks record of 23 matches which included 16 victories.

"Macie Jensen showed great strength while playing a slow and patient game each time, waiting for the perfect kill shot. Lauren Stone played up her strength at attacking the net and waiting for the right moment to put the ball away from her opponent. Ali Kotter worked the whole court against Forsyth and Red Lodge, working on new skills chasing down every ball. Sophie Meskimen leaned on her endurance in each match, especially along 9-8 win in a tiebreak match against Forsyth that required a lot of patience and smart shots," Lauver said.

"Karin and Jac are frequent contributors to doubles teams but have continued to show their versatility on the court and can transition well into full-court coverage when the opportunities arise," she said.

"It seemed everyone was having a great time playing really fun matches - honing in on skills and trying different defense strategies out. Ruby and Alicia continue to lift each other up and provide good coverage for their teammate under pressure. Maddie and Karin both play similar strategies, and both saw increased points at the net against both Red Lodge and Forsyth. It was awesome to get to watch Jac and Sarah, Claire and Malia, Sophie and Ali, Macie and Lauren get out today and just have fun playing through each point. There were many long rally points," Lauver said. 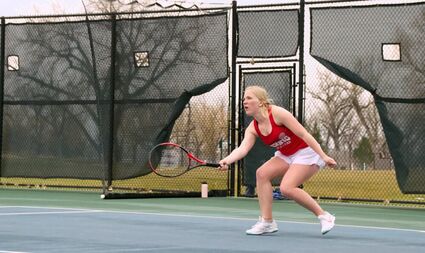 In other doubles action, Lauver said freshman Abby Diaz (with Christman), and Carly Lema and Lauren Wagner played long matches racking up a total of 14 games won, including some incredible comeback games that involved some even more impressive net games against Red Lodge.

Despite rainy conditions on Friday, the Wolves were still able to get 25 matches over two days at the Simms "Sing and Swing" Invitational in Great Falls. Three Forks was able to win 13 matches.

In doubles action, the team of Meskimen and Kotter had two victories.

Three Forks played Monday in Boulder and will head this weekend to the DawgBite Tournament in Helena.