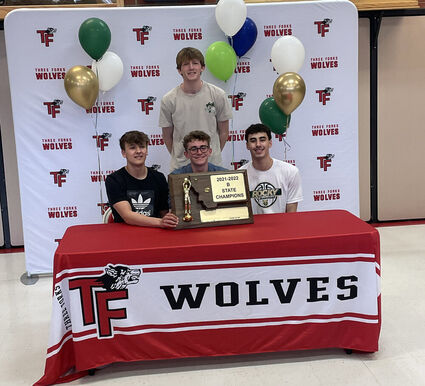 It has been quite the week for the Three Forks High School athletic program, with five Wolves signing letters of intent to continue their careers in college.

The 2022 Class B State Champion Wolves basketball team had four players sign, with Jacob Buchignani, Mikey O'Dell, Owen Long, and Finn Tesoro putting the ink to paper to play at the next level. Cross country and track standout Jayden Woodland also signed a letter of intent to compete in both sports.

The starting point guard for the state title team, Buchignani, signed to play next season at the University of Providence in Great Falls.

"I'm very excited and thankful for the opportunity. I'm ready to go to the next step and perform," Buchignani said.

With an eye on his collegiate career, Buchignani said he was impressed with Providence Head Coach Steve Keller and his program.

"He is a super great coach. They also have my degree, which is really exciting. I'm ready to get up there and work," he said.

"He handled the ball for us, got guys open looks, and hardly turned it over. He became a standout point guard for us this year, Hauser said.

One of the best defenders in Montana, the well-rounded O'Dell signed Monday to play at Rocky Mountain College in Billings.

Before signing his letter of intent, O'Dell said he was really excited about the chance to play in college.

"I'm ready to show everyone what I can do and get to work," O'Dell said.

After visiting Rocky, O'Dell left impressed with what he witnessed.

"Love the coach and love the facilities. They have a great workout program, and that is something that intrigued me," he said.

With a state title during his one year with the Three Forks program, O'Dell will look back fondly on his tenure with the Wolves.

"This whole year has been a dream come true," he said.

To Hauser, O'Dell was a special player he said could do it all.

"He can score, rebound, and was our best defender. He guarded their best player every night, no matter what position the opponent was. He could guard 1-5, which not many kids can," Hauser said.

A four-year member of the varsity team who was all-state as a junior and senior, Long signed last Wednesday to play at Montana Tech in Butte.

Minutes before signing, Long said he was really excited about the opportunity to play at Tech.

"I dreamt about it as a kid. It has been a lot of hard work and definitely something I'm happy I get a chance to do," Long said.

Looking towards next season, Long said Ore Diggers Head Coach Adam Hiatt and the players in the program are awesome, and he would like to get some playing time during his freshman campaign.

"I know that is tough for a freshman in the Frontier Conference, but it is my primary goal.

Hauser lauded Long's growth as a player during his four years on varsity.

"It was amazing. This year, he didn't care as much about scoring. He just wanted to win. He matured into a leader. It was amazing to watch him do it in every aspect of the game. We captured a state title because of his selflessness," Hauser said.

A sharpshooter who shined brightly in his one season at Three Forks, Tesoro signed last week to play at Rocky Mountain College.

Tesoro also said he is very excited about the opportunity to play college basketball. After visiting Rocky, Tesoro liked that it was a smaller college and is also in Billings.

"The atmosphere there seems very cool," he said.

After starting his high school career in Manhattan, Tesoro transferred to Three Forks his senior year and had 28 points in the state title win over Harlem. He will take fond memories from his time in Three Forks.

"I'll always remember it," he said.

Hauser said once Tesoro got comfortable about ¾ of the way through the season, he was unstoppable.

If they had given an MVP of the state tournament, he probably would have got it," said Hauser.

Proud of all four players, Hauser was ecstatic about them continuing their careers.

"What a great year we won the state title and had four kids sign letters of intent to continue their college careers. Truly was a special year," he said.

During her four years at Three Forks High School, Jayden Woodland was one of the state's best Class B basketball players. At the start of her junior year, Woodland decided to join the cross-country team. For her senior year, Woodland would also join the track team. She excelled in both sports and signed a letter of intent to compete at Rocky Mountain College on Monday.

Woodland is thrilled about the opportunity. 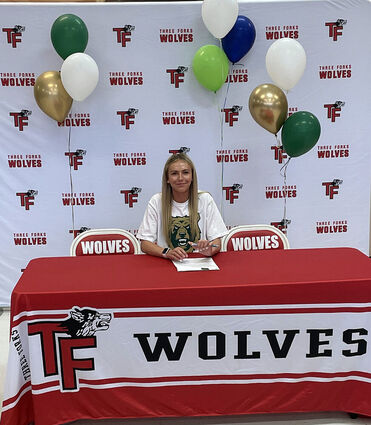 "I am super excited. I just loved how small the school was, and I'm so excited to continue my education in biology. Meeting my coaches and teammates, I was so stoked," she said.

Looking back on her decision to join cross country and track, Woodland said it was a very rewarding experience.

"Jayden is talented, hardworking, modest, kind, and so eager to learn. No matter what she was asked to do in practice or in meets, she did it. I could not be more excited that she is continuing cross country at Rocky. She will no doubt excel," Forsberg said.