Head Coach Janna Lauver said the team played really hard through some exhaustion and soreness achieved after hard work the prior week.

Lauver said notable matches, including Ali Kotter having an impressive run and Sophie Meskimen playing two very long sets with tiebreakers. Lauver added Jacqueline Rollyson had a good day in singles after playing doubles for most of her tennis career.

It was a great day for the Wolves doubles teams, who picked up five victories.

Despite some setbacks due to weather and some action moved inside, Three Forks was able to win 18 matches at last week's DawgBite Tournament in Helena. 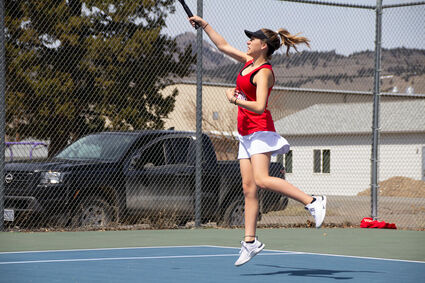 Lauver said the big story from the weekend was Warden and Deriana defeating Fort Benton's one team Ashlee Wang and Sammy Vielleux, 7-5.

"They fought hard for each game making sure to clinch the win late in the day Friday indoors," Lauver said.

In other doubles action, Lauver said Griffiths and Williams got a win against the two seed from Jefferson and had a tough match with Jade Martin and Lexi Howard of Broadwater.

Other notable matches listed by Lauver were Macie Jensen with a nice win against Charlie Sue Dresisbach of Lone Peak, Stone with a great win over Broadwater's number two player Kira Kyung, and Ali Kotter beating Sydney Forrey of Broadwater and Murolo.

Stone had three victories in singles play, and Kotter had two. Jensen, Eriksson, Williams, and Christman each had one win.