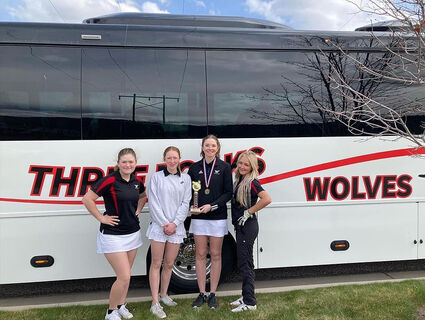 The Three Forks High School golf team will get the opportunity to play on their home course when they host Thursday's Headwaters Tournament.

"There will be a lot of golfers there, so we will get some more great competition, and we will look to use our home course advantage to all it is worth," said Harkins. "I think the kids are really excited that they don't have to get up super early to catch the bus as well."

With a lot of preparation going into the tournament, Harkins noted he is lucky to have some great assistants to help out, and what he said should be a really fun tournament. He is also hoping for great weather.

The tournament will begin at 10 a.m. with a shotgun start, and spectators will be allowed in certain areas.

"Come out and give a golf clap to your Wolves golfers," he said.

Harkins said his team fought hard, but unfortunately, senior Taylor Raffety had to withdraw due to illness after finishing the first day in the second play.

"Halle Wilson and Ari Judd picked up the reigns and led the team at Canyon River on the second day to a third-place finish, with Halee winning a chip off for fifth place and Ari Judd taking 10th. The boys didn't fare quite as well, but they still played some good golf, given these were both new courses to all of them. Austin Allen led the team and was 21st, with Walker Page and Cass Violett not far behind. There were a lot of good divisional teams at this tourney, so it was good to see how we are stacking up against our competition," Harkins said.

With the postseason on the horizon, Harkins said the girls would be right in the mix of things at the divisional tournament, and on the boy's side, they have a little work to do.

"But both teams are excited, and we hope we get some good weather so we can have a solid week of practice before our tourney next Thursday," he said.