Gov. Greg Gianforte asked land managers for their commitment to aggressive initial attack to extinguish all wildfires at a 2022 wildfire briefing in Helena last week.

"In Montana, we do not, and will not, have a 'let it burn' policy," Gov. Greg Gianforte told representatives from about a dozen state and federal agencies present at the briefing. "We will respond immediately to fire with one primary goal, and that is to put that fire out as safely and quickly as possible. I appreciate all of your commitment to embrace that strategy along with the state."

He asked the land managers present, including representatives from the state Department of Natural Resources and Conservation, the United States Forest Service, the Bureau of Land Management, U.S. Fish and Wildlife Service and the Bureau of Indian Affairs for an affirmation of their commitment to extinguishing all wildfires.

Notably absent was the National Park Service, which for more than five decades has been letting some wildfires burn within park boundaries in recognition of wildfire's role in maintaining the health of fire-adapted ecosystems. During last year's wildfire season briefing, a remotely participating NPS representative pushed back on Gianforte's approach to wildfire management, saying the agency deploys aggressive initial attack on some fires, but also considers wildfire's natural role on landscapes, including in Yellowstone National Park.

At this year's briefing, the assembled participants issued their explicit or implicit affiliation with Gianforte's approach. A representative from the Forest Service, which manages more land in Montana than any other federal agency, said her agency would use every tool available to provide rapid initial attack on "unwanted wildfires."

Regional Forester Leanne Marten also said the agency would likely have to make "really tough decisions" to prioritize its response to fires based on resource availability, weather and terrain. It was unclear from Marten's remarks whether lightning-ignited wilderness fires in Montana will be allowed to burn under certain conditions, in keeping with a policy the Forest Service first adopted in the 1970s.

Briefing participants also discussed temperature and precipitation forecasts for the summer, how agency efforts to hire wildland firefighters are shaping up and developments in the state's air quality monitoring program.

Steve Ippoliti, a predictive services meteorologist with the Northern Rockies Geographic Coordinating Center, said below-average temperatures during the past three months have helped the region hold on to its snowpack, so Montana is looking slightly better heading into the 2022 wildfire season than it did last year, which saw the entire state enter some level of drought.

"We're recovering, but it takes a lot to recover from a significant deficit," Ippoliti said.

No part of the state is currently in the worst category of drought, Ippoliti said, adding that parts of northwestern Montana, which are currently sitting on a snowpack at or above the 30-year median, are out of drought entirely.

The National Significant Wildland Fire Potential Outlook, a monthly report produced by the National Interagency Fire Center, is calling for a slow start to Montana's fire season. But by July, all but the northwestern corner of the state is expected to see above-average potential for significant wildfire activity.

Ippoliti noted that parts of the West Coast are also gearing up for an above-average fire season, which could put a pinch on firefighting resources nationwide - airplanes and helicopters in particular - and contribute to smoky skies in Montana.

Sonya Germann, who heads up the state Department of Natural Resources and Conservation Forestry Division, thanked Gianforte for raising state wildland firefighters' base pay to $15 an hour.

"That was a major morale boost, and it is helping us to recruit wildland firefighters this year," Germann said. "Everyone's struggling to fill firefighting positions, but this is hopefully going to give us the best shot at hiring some of these individuals."

Germann also said that given the agency's expectation for another active fire year, "you're probably going to be hearing scarcity of resources coming from us again."

Bryce Rogers, the Bureau of Indian Affairs' regional fire management officer, said his agency is looking at 59% vacancy rates for wildland firefighting positions and will continue to rely on local governments for wildfire response. Some of the largest and most destructive wildfires of the 2021 season burned on reservations last year, including southeastern Montana's Richard Spring Fire, which the state declared a major disaster.

The timing of this year's fire briefing, which took place more than a month earlier than last year's wildfire briefing, reflects the ever-expanding fire season across the West. The 2021 fire season was off to a galloping start by mid-June with the Robertson Draw fire near Red Lodge growing to 21,000 acres in the span of two days. The 2021 season also came to an unusually late close.

One of the state's most destructive fires, the West Wind Fire, forced an evacuation of Denton on Dec. 1. The state's wildfire emergency declaration persisted through almost half of 2021 and wasn't lifted until Dec. 31. 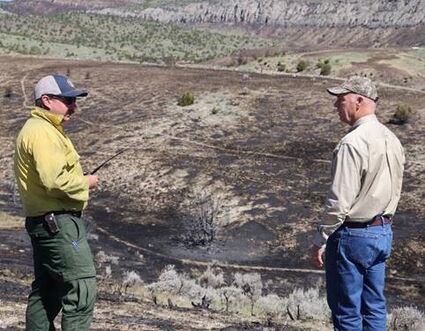 Bo Wilkins, who heads up the Department of Environmental Quality air quality bureau, said his agency expects to install additional permanent air quality monitors this summer to join its current fleet of 20. New research about health impacts associated with breathing wildfire smoke is emerging almost daily, Wilkins said, adding that DEQ is exploring adding a smoke forecasting tool to its website to give Montanans more information to help reduce their exposure.

Wilkins also said DEQ has been working closely with other partners over the past year to mitigate adverse impacts from prescribed burning, which has ramped up in the past year.

"If you've been in Helena, you've probably noticed," he said. "And this past week has really proved to us that we can do that successfully across the state."