Eye on the prize: Murphy has lofty goals for 2022 postseason 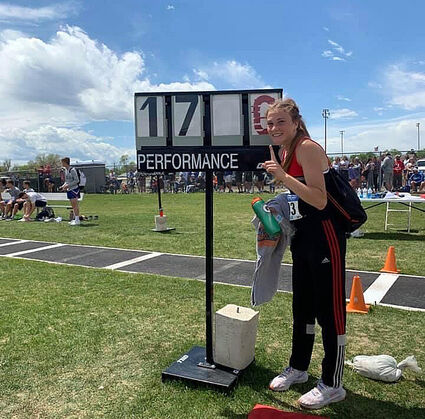 Jasmyn Murphy won the state long jump title in 2021. She has already pre-qualified for state in the event.

After a winning state title in the long jump at the 2021 Class B State Meet in Laurel, Three Forks senior standout Jasmyn Murphy is readying for the 2022 postseason that begins Friday at the District meet in Belgrade.

"I have some very large goals this postseason that I hope to achieve. They are to win state in the long jump again, win in the open 400, and place in all of my other events," Murphy said.

It has been quite the career at Three Forks for Murphy, who has had some remarkable moments and faced a few challenges, including the cancellation of the 2020 season due to the COVID-19 pandemic.

After shining throughout the 2019 season, Murphy ended her freshman campaign by placing at state with a sixth-place finish in the triple jump.

Looking back at her ninth-grade season, Murphy said it felt great to place, although she could have been more excited because she knew she could have done better in her other events.

"I was predicted to place fourth in the 300 hurdles, my best event at the time, and my younger, inexperienced self allowed adrenaline to get the best of me, causing me to burn out and get seventh place. This experience gained me a bit of frustration to prepare me for the following seasons," she said.

After finding success as a freshman, Murphy and her Wolves teammates could not compete after the cancellation of the 2020 season.

"It was hard to not be able to compete, especially with wanting to achieve more at state than I did my freshman year. I also missed my teammates and being able to practice with them," she said.

The canceled season would not stop the hard-working Murphy.

Despite not being able to participate in an MHSA sanctioned event, Jasmyn and her father, Jason, started the 2020 Montana Virtual Track season, which allowed athletes throughout the state to have a chance to compete.

"Being able to start the virtual track season was very rewarding in my eyes because I knew I was helping other athletes that felt the same way I did. It also made the experience of lockdown slightly more 'normal'," she said.

In May of 2021, Murphy and her Three Forks teammates returned with an entire season of action.

"It was so much fun. My junior year experience was great. I love my teammates from junior year and made many fun memories. They were also so supportive of me and always kept me competitive and on my toes," she said.

Murphy ended her junior season with a state title in the long jump. She won the title with a jump of 17 feet and .25 inches.

Throughout the season, Murphy said she had struggled at achieving her big jumps while also marking them at every meet.

"I had many seventeen-foot-plus jumps that season, but I was scratching them by a centimeter every time. So, to finally hear the word 'mark' when I knew it was a good jump was a wave of relief. It was only my first jump as well, so while my relief had calmed me, I was still nervous to see what my competition might do," said Murphy.

After realizing she finished first, Murphy said it was like she was in a dream.

"At the end of the meet, I watched the final girl jump her last one and realized I had just won state. It was an experience that honestly still has me in shock. My whole life, I always looked up to top-tier athletes with great admiration, and to find out that I had just become one of them is a feeling that I can't describe," she said.

Murphy also finished fourth in the 300 hurdles and sixth in the 200 meters at the 2021 State Meet as a junior.

While Murphy has found success during her senior season, including a meet record in the 400 at last week's John Cheek Top 8 event in Anaconda, she has found this season harder than prior years.

"One being that I have worked much harder than ever before, which is great but also makes it a bit more tiring," she said.

After having a meet canceled and less than ideal conditions at others, Murphy has also been challenged by the weather. 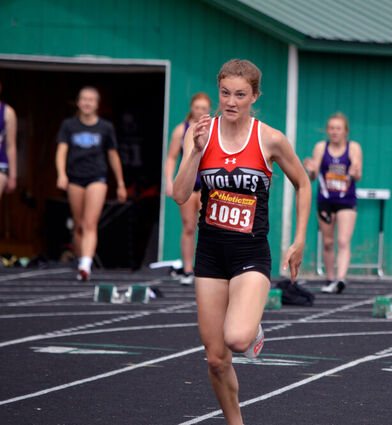 "We still have not had a warm meet which makes it very hard to compete and can set athletes back when trying to do well or pre-qualify for state," said Murphy. "Regardless of those things, this season has been lots of fun, and as always, I love my teammates and the environment. My coaches have also been so great this season in pushing me to do my best and always having my back. I also have pre-qualified in two of my events (long jump and 400) which is so relieving and makes things easier for me to do well."

Three Forks Head Coach Tracy Welter praised her senior for what she has accomplished and meant to the team.

"We all love Jazzy. She is an inspiration to not only all the athletes but to us coaches. She is one of the hardest working athletes we have had, and it has most definitely paid off," Welter said.

Murphy is still undecided on where she will attend college next year but hopes to achieve a doctorate in Physical Therapy.

"I'm trying to choose the college that will suit me best, where I can hopefully achieve a track scholarship," she said.