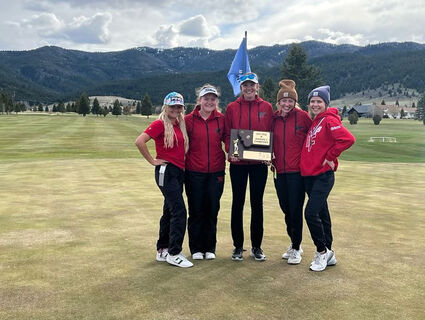 Pictured are the 2022 District 3 Divisional Champions.

What a great few days at Fairmont for the Divisional tournament.  From a cold and windy practice round Monday where we discussed some ways to attack the course and some ways to simply survive a few holes, to a fairly pleasant Tournament round on Tuesday where the girls performed really well and claimed their second divisional championship in as many years.

All the coaches were blown away at the maturity the girls showed in their golf games and the outcome spoke for itself.  Four of the five varsity girls managed All-Conference honors (placing top 15 at divisional) and the fifth girl took 18th place so that was incredibly awesome to see.  Taylor Raffety shot an 89 and was in a tie for second place (from a scorecard playoff she finished 4th), Halee Wilson came in 7th, Ari Judd 10th, Brooklynn Hossfeld 11th, and Lydia Kluin came in with a highly respectable 18th place.  We as a team have been talking all year about the idea of us getting a team score of under 400 and how that would put us in contention to compete at the State tournament.

Well, the girls came in with a team total of 396 and claimed the team title so we completed that goal and hopefully, we can build upon that next week as we head back to Fairmont for the State Tournament.

On the boy's side, things didn't end up quite as we had hoped, but we did have a few boys shoot some of their better rounds on the year.

Austin Allen led the way with a 95 and a tie for 20th and Morgan Karn was one stroke back of Austin giving him a tie for 22nd. Cass Violett also played really well as a freshman in his first postseason golf tournament which will hopefully keep him and the other underclassmen on the team motivated to get out to the course a lot this summer in hopes of putting a contending team together for divisional and state next year.  Even if the scores weren't low enough to get the boys' team to state, we are so proud of how they handled themselves all year.  A great bunch of boys for sure.

Austin Allen and Walker Page will be leaving us as they go to college, and it sure has been fun to be their coach for the last 4 years. Thanks guys!!

Dylan Kamps will hopefully come back really strong next year as a senior and bring that leadership that all the good teams need and have.

As far as the upcoming State Tournament, there will be a practice round on Monday, May 16 followed by two days of tournament rounds on Tuesday and Wednesday.  The coaching staff will be working with the girls to get them ready to go play their best and if they do that, no matter the outcome, we will consider it a successful season.