More than a dozen community members approached the Three Forks High school board with the request to consider a high school girls softball team for the next spring sports season and to share their softball experience during the board's May 18 meeting.

At the moment, Three Forks Fastpitch Softball, a local recreational league, has operated for seven years and only accommodates players under the age of 14. The Montana High School Association deadline for adding a sport to the 2023 spring season was May 1; however, the board expected there to be some "wiggle room."

Superintendent Rhonda Uthlaut told the Three Forks Voice that she never likes to say no to something that students show an interest in; however, the district has to consider other factors. "I think every educator has it in their hearts, we want kids to have every opportunity," Superintendent Rhonda Uthlaut said during the board meeting. "But, we have to look at what the cost will be."

The recent mill levy failure limits what the Three Forks School District can spend money on, Uthlaut told the Three Forks Voice during a phone interview on Sunday. Uthlaut said the board will likely bring the mill levy vote back at the next election to help fund operational costs, staff salaries and address the district's needs.

Although funds in the district are tight, Uthlaut didn't turn down the possibility of adding softball to the school's sports line-up. "We'll do the most with what we have," she said, adding that the district has always been mindful of how it uses taxpayer money.

The parent presentation estimated a $37,000 start-up cost for the school's first year, and $8,000 each season after. To help supplement the school's payments, the parents identified three potential grants from Sports Matter, Good Sport Equipment and the Land and Water Conservation Fund. The presentation also offered three possible fundraisers which included a softball tournament, a home run derby and a team car wash.

Audience members speaking in support of softball notified the board of their plans to send out a "letter of intent" asking community members how much they would donate to the start up of girls softball and each year after. Although Uthlaut voiced concern of getting the community's hopes up during the meeting, she expressed gratitude for the community when speaking with the Three Forks Voice. "Even with the levy not passing, I know that this community supports our schools," she said.

While grants and fundraisers could help supplement the added costs of a high school softball team, MHSA's Title IX rules require the school to have an equal proportion of girls' and boys' sports. Were the school board to approve softball, it must add a boys' sport too. Audience members in support of girls softball suggested boys baseball as the counterpart. However, Janna Lauver, the head coach for the Three Forks girls tennis team questioned whether the board would consider a boys tennis team in a Facebook comment.

If the Three Forks school board approves girls softball and a boys counterpart sport, the MHSA board must approve it too.

At this point, the school board is not for–or against–a girls softball team; however, Uthlaut did list several positives athletic opportunities offer students. "Kids who find something to be involved with at school, whether it's a club or an athletic sport, ... they have better attendance, they have better academic gains," Uthlaut said.

Several players aging out of the program shared comments on what softball means to them during an emotional public comment session. A presentation explaining the feasibility of adding a high school softball team accompanied the players remarks.

A common sentiment among the players is that softball has helped them learn and grow as both a player and a person. "Softball is more than a game, it's something I can play when I'm mad, or sad, or even happy," one player told the school board. Another player compared aging out of rec softball, without a high school program to play in, to the loss of a loved one. 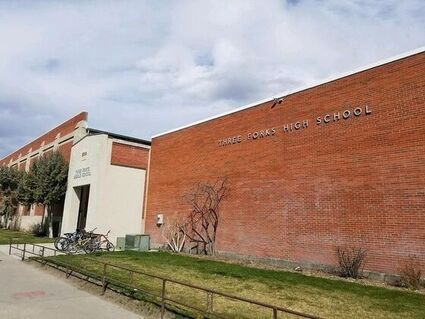 While emotions played a role in the players request for a high school softball team, players also voiced the desire to participate on a college softball team. "We will never get the chance [to sign with a college] because it all stops here unless we can continue with a high school team," one player informed the board. For another player, college seemed out of reach without the assistance of a softball scholarship. The parent presentation informed the board that "softball offers the second most opportunities for college scholarships in the nation," making it a viable option for lower income players to get into college.

After sharing their heartfelt comments and passion for the sport, the Three Forks recreational softball players gathered together at the front of the room to thank all those there supporting them and left the room with an energetic "1, 2, 3–Three Forks!"