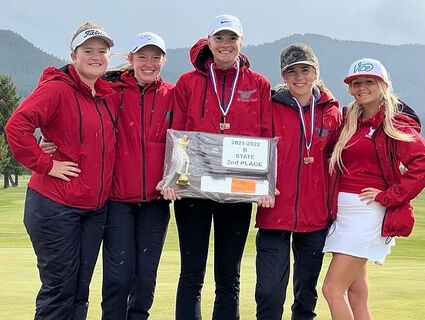 The Three Forks High School girls golf team finished second at last week's Class B State Tournament at the Fairmont Golf Course near Anaconda. The Wolves finished with a total of 806 strokes, only behind consecutive state champion Columbus who finished at 760. Taylor Raffety finished in tenth place, and Halee Wilson ended the tournament in 15th, earning them both All-State Honors. Below is a snapshot of the tournament from Head Coach Aaron Harkins.

The coaching staff was beyond impressed by our girls.  They went out the first day with a lot of nerves and it took about 9 holes for them to settle in, but they got it together and posted a pretty dang good number for the first round.  All year I have had the idea that if we can get four girls to shoot under 100, we would have a chance at some hardware at State and although we didn't quite reach that goal the first day, we were close, posting a 406.  That put us 32 strokes behind Columbus (the defending State Champs) which is a pretty large amount of strokes to overcome.  We went into the second day with the mindset of just "play your game."  The nerves were still there, but not as apparent and about an hour into their final round, coach Schilf and myself watched three of our girls in a row birdie number 16.  Pretty incredible when you see that sort of scoring during the round.  Lydia Kluin added a birdie early as well when she chipped in on her first hole for a deuce. I'd be lying if I said myself and the other coaches weren't nervous as it seems that our brains tend to react more towards the wayward shots or missed putts than the great shots but not knowing where you stand score-wise is quite nerve-racking.

As the players were getting close to finishing their rounds all the coaches were standing behind the 9th green seemingly wearing a track in the ground from our pacing. When Taylor Raffety putted in for a par on the last, I had the smallest sense of relief as we knew some scores were going to be posted so we could calculate our final team scores. Taylor walked up to me, told me what she shot, and then there were a few tears shed maybe as a sense of relief, or maybe because this was her last high school golf round.  A special moment for sure.  One by one, the other girls came in and my heart was starting to unwind from the stress of the unknown scores.  Once all the scores were up a quick tally from the coaches and then there were high fives all around.  The girls lowered their team total that day to 400 even and we claimed second place in the State Tourney.

With all the hard work those girls have put in over the past 3 months (and for some the last 4 years) it was a breath of fresh air that they had some hardware to show for it. I think Coach Hauser put it well when he said, "you could tell it hadn't really sunk in until they grabbed the trophy" after that, there were smiles, hugs, high fives, and pictures galore. I know I speak for all the coaches when I say that this was a special group of ladies not only on the course but off as well and the seniors (Brooklynn Hossfeld, Halee Wilson, and Taylor Raffety) will be greatly missed.