The Three Forks Farmer's Market will officially open for the season on Thursday, June 2, from 4 p.m. to 7 p.m. at the John Quincy Adams Milwaukee Railroad Park. Market Co-Manager Laura Brewer sums up what she enjoys best about the event with one word – community.

"The small-town feel really comes alive on Thursday afternoons when folks of all ages gather to share the things they have grown, baked, or made with their hands," said Brewer. "When we moved to the area almost six years ago, we didn't know anyone. I started selling my crocheted items at the Farmers Market as a way to meet those in the community. I have been truly blessed by friendships that began by meeting fellow makers at the market."

This year will be the second year Brewer has managed the market in some compacity and will be joined by her good friend and Co-Manager Carolyn Nealen.

"She (Carolyn) has spent the last several weeks diligently seeking out folks to sign up for the non-profit cookout each week and additional Community Corner demonstrations," Brewer said.

The transition to management has somewhat changed how Brewer looks forward to the first market.

"Instead of thinking only about my own products and displays for my booth, I've been thinking about how we will be organizing the weekly market, developing community awareness, and our vendors. I'm looking forward to the opening of the 2022 season so that we can see all the 'old' faces from past years and also meet some new ones," she said.

According to Brewer, the season's biggest night will be on July 14, the same week as the Three Forks Rodeo. That evening the Three Forks Chamber will run the non-profit cookout and a stick horse derby, a free event sponsored by local businesses.

The first non-profit scheduled to cook in 2022 will be the local Rebekah Lodge on June 19. The Mighty Spork food truck will be at the market on the 16, the Future Farmers of America are scheduled for June 23, and the Three Forks Ambulance is scheduled for June 30. 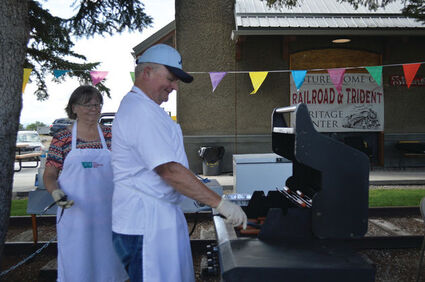 The July schedule includes the Chamber on the 14th, Headwaters Food Bank on the 21st, and Three Forks Methodist Church on July 28. The Three Forks Historical Society will be serving walking tacos on August 4. The Three Forks Volunteer Fire Department is scheduled for August 11. The Headwaters Trail System will be making bacon cheeseburgers and brats on August 18 the library will be the non-profit on August 25. The final market on September 1 will have the FFA.

The first Community Corner will take place on June 2, featuring a petting zoo provided by Lea Miller of the Gallatin Conservation District. Other Community Corners scheduled so far include Irish singer Kenan Flannery on July 28, the Fire Department on August 11, and a story/craft time with the library on August 25.