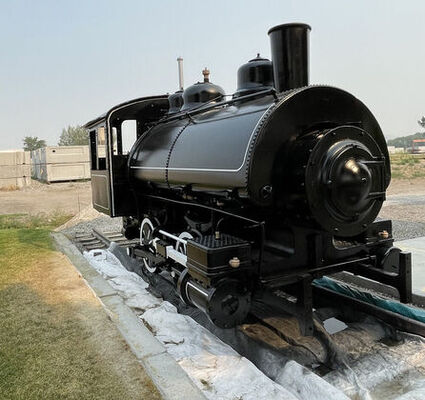 Pictured is the steam engine at the Railroad and Trident Heritage Center. File photo

Both the Headwaters Heritage Museum and the Railroad and Trident Heritage Center will receive some long-awaited updates and installments this summer, according to Three Forks Area Historical Society President Pat Townsend.

At the Headwaters Heritage Museum, construction on a time period appropriate roof extension on the back of the building will begin sometime this June. The back area will be closed during the three days required to complete the structure.

Townsend said the new roof will help protect the wagon and other farm equipment displayed from the weather. "We want to take care of what we have, '' Townsend told The Voice during a phone conversation, going on to explain that the weather has taken a toll on the condition of the exhibit.

To ensure that the new roof conforms to the museum's current look and feel, Townsend said they plan to use large wooden posts and a metal roof that will rust with exposure to moisture.

The downtown museum will also receive a long-awaited new front door after the current one cracked more than a year ago. When the damage occurred, the museum taped a cover over the door and ordered a replacement; however, Townsend said they did not expect the delivery to take a year. The new doors will also be installed this June.

Alongside the physical renovations, the museum will receive a virtual update as well this summer. Ethan Hegar, a former Three Forks High School student, created a virtual tour of the museum to allow people to view the exhibits from anywhere in the world as his senior project. The digitized display will be available online later this summer.

Projects taking place at the Railroad and Trident Heritage Center include restoration of the Trident steam engine, refurbishment of the museum's nearly antique caboose, placement of various equipment on the museum's gravel pad and finishing the installation of a railroad signal light donated to the museum.

This summer the steam engine will have holes drilled into the back and its bumper attached. The museum began restoring the Trident steam engine three years ago after transporting it from Virginia City. Revitalizing the 1911 steam engine–which was previously used in the Trident rock quarry–has been slow moving because original parts are difficult to obtain, Townsend said. "There's many mechanical things that need to be obtained to finish the restoration," she explained.

With people throughout the United States on the lookout, the heritage center has received some parts for the project; however, it still takes a long time to find each piece. Townsend recognized the generosity of those who have donated pieces for the steam engine and other museum exhibits.

The heritage center's railroad signal light is one of such items donated for display. The functioning signal only required some new paint and light hoods. While the freshly painted signal lights up when the center is open, the museum has yet to install the hoods. The light, donated by a Helena man, was used as part of the Montana railroad system.

After repainting and replacing the roof on the heritage center's historic caboose last summer, the historical society plans to return the train car's interior to its original glory by installing new windows and hanging the appropriate wall material. While the only thing preventing installation of the windows is poor weather, the heritage center has yet to receive the supplies for the interior update. The wall board is expected to arrive in July.

Once the 1939 caboose is restored, the heritage center plans to use it as an extension of the museum.

The nearly-antique caboose–items classified as antiques must be at least 100 years old–is one of 10 remaining models produced by the Milwaukee Railroad company that year. The company only produced 75 cabooses in 1939.

While the ongoing restoration and construction projects are cause for excitement, the Three Forks Area Historical Society is also preparing to celebrate the 40th anniversary of the Headwaters Heritage Museum moving into its current building.

Before occupying its current space, the museum operated out of several rooms in the Sacajawea Hotel. In 1982, the historical society purchased the museum's current building from First Security Bank. The society has yet to determine how they will celebrate the event, Townsend said.

Until the society determines how they will commemorate the anniversary, museum visitors can use the occasion as an excuse to enjoy some of the Johnny's Family Candies sold in the Headwaters Heritage Museum gift shop. These made-in-Montana chocolates are preservative free and come in a variety of treasure state themed shapes and flavors.