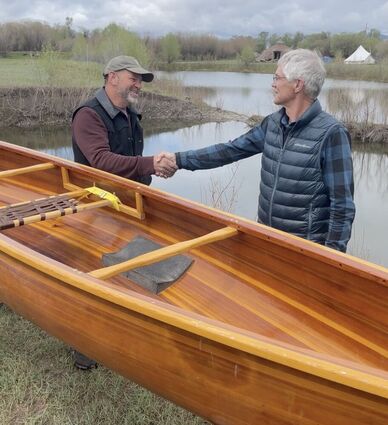 Tom Elpel swaps for Peter Husby's cedar strip canoe in the ongoing trade-up challenge to trade a book for land for a public campsite on the Jefferson River Canoe Trail.

Montana real estate prices are skyrocketing, creating additional hurdles for conservation work. Feeling the need for a new approach, local author and conservationist Thomas J. Elpel initiated a trade-up challenge to swap a book for land for a public campsite on the Jefferson River Canoe Trail in southwest Montana.

Elpel is president of the Jefferson River Chapter of the Lewis and Clark Trail Heritage Foundation. Chapter members previously raised funds and purchased two properties for public campsites, including a 5-acre site near Three Forks and a 30-acre property near Waterloo.

"Fundraising for conservation work is a challenge in the best of times," Elpel said, "and we've seen riverfront property values double, triple, and quadruple over the last few years, effectively pricing us out of the market."

As an author, Elpel decided it was logical to initiate the trade-up challenge with a book, offering Five Months on the Missouri River, his Lewis and Clark-themed travelogue about paddling a dugout canoe from Montana to St. Louis with five men and a dog. Elpel won the Writer's Digest 2020 First Place Award for Nonfiction for the book.

In the latest trade, Elpel swapped the AirBnb experience for a handcrafted cedar strip solo canoe from Peter Husby, a fellow paddler and chapter member. Husby said his late father-in-law was once president of the Lewis and Clark Trail Heritage Foundation, and he would have enthusiastically supported the Chapter's conservation work on the Jefferson River.

Elpel estimates the cedar canoe is worth at least $2,000. He is now looking to trade it up for something of even greater value. He is donating a signed copy of his book with every trade. 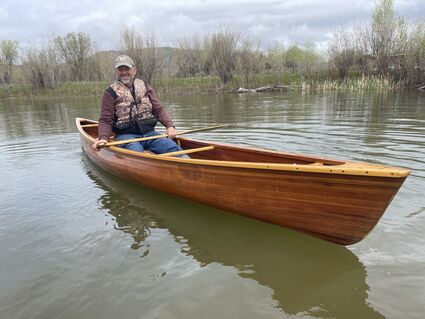 "I don't know how long this will take," Elpel said, "but I hope to trade up towards something valuable enough to trade or sell for land for a public campsite."

"Deep-pocketed donors are few and far between, Elpel said, "but everyone has something to trade. Small trades can lead to big trades, and every swap supports the final goal of conserving land."

Properties purchased by the Jefferson River Chapter are protected from development and open to the public for fishing access, mushroom hunting, bird-watching, and overnight camping for paddlers. "Many people just like to walk their dog along the river," Elpel said.