Low temperatures and persistent precipitation combined with an unusually high June snowpack to set the stage for historic flooding in southwest and south-central Montana last week. At least five rivers in Park, Carbon and Stillwater counties set all-time records for high flows, wiping out bridges and roads and sending entire buildings downstream in the process.

Ed McIntosh, a meteorologist with Billings news station Q2, said a recent cycle of precipitation from the West Coast brought a significant amount of rainfall to southern Montana, where it went to work melting an already ample snowpack in the Upper Yellowstone Basin.

He said an atmospheric river - "basically a high-elevation firehose" -  fell on snowpack in the Beartooth and Absaroka mountains that's two to three times the depth it would normally be at this point in the season due to an especially cool May and June. That resulted in an "exceptional set of circumstances" for both rainfall and snowmelt to enter watersheds in Park, Carbon and Stillwater counties.

Rain on top of snow can rapidly accelerate snowmelt. McIntosh compared it to the process of thawing frozen food under running water.

"The net effect of rain on snow is that it's definitely going to melt snow faster," he said.

The USGS gauge on the Yellowstone River at Corwin Springs, near Yellowstone National Park's northern entrance, registered a record volume of 49,400 cubic feet per second at 2 p.m. yesterday - double the previous morning's recording and toppling the previous record of 32,200 cfs and gauge height of 10.92 feet set in 1996.

The Lamar, Gardner, Clark's Fork and Stillwater rivers also posted record numbers yesterday, and Rock Creek - which wiped out several bridges and turned Red Lodge's main drag into a shallow channel  - also appears to have broken records. The USGS's gauge registered its last reading at 9:15 a.m. Monday before it became non-functional due to flood damage. It was reading 8.5 feet at the time, breaking the 2011 record of 7.8 feet.

The Stillwater River obliterated its old record of 12,000 cfs, reaching an astonishing volume of 23,900 cfs and exceeding the 7.5-foot flood stage threshold by 2.5 feet. It wiped out a road leading to the Sibanye-Stillwater mine.

All those rivers run into the Yellowstone, which continues flowing east and north before reaching the Missouri River on the east side of the Montana-North Dakota border.

Emergency responders have been tracking the Yellowstone's flow further downstream in communities like Billings and Miles City.

McIntosh said he expected  the Yellowstone River at Billings, hundreds of river miles downstream of the Corwin Springs gauge - to peak around 2 p.m. Tuesday, reaching a moderate flood stage. As of 3 p.m. the Billings gauge read 14.73 feet, below the site's record of 15 feet and well within moderate flood stage.

The USGS is forecasting that the Yellowstone River at Miles City will continue rising through Thursday afternoon, when it's expected to reach minor flood stage. McIntosh noted that cooler temperatures will slow snowmelt over the next few days, but that there's still plenty of snow up high that will work its way to lower elevations in the coming weeks.

State climatologist and University of Montana watershed hydrology professor Kelsey Jencso said the recent precipitation and snowmelt in southern Montana might be enough to pull parts of south-central and southwest Montana out of a persistent drought that's dried out soil, desiccated crops, depleted groundwater, and sapped the moisture out of vegetation, making it more available to burn.

He told Montana Free Press Tuesday afternoon that he expects by next week those parts of the state will transition from "moderate drought" to "abnormally dry" or lose their drought designation altogether. 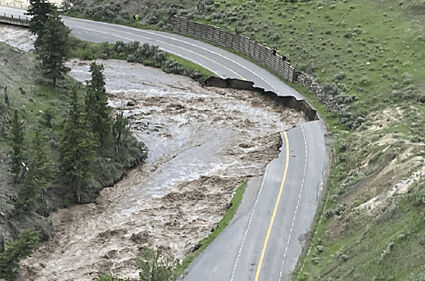 Jencso said even though high streamflows can be devastating for infrastructure like bridges, roads, homes and even dams, they will be a net benefit for aquatic ecosystems by supporting adequate flows and cooler temperatures heading into the hottest months of the year.

He also said more data is needed to establish if the flooding is directly related to climate change trends, but noted that this week's flooding is the result of a springtime precipitation event that the 2017 Montana Climate Assessment anticipates.

"That's what's hard to wrap your head around," he said. "It's really the variability and the predictability - the extreme ends of these things."