It is a little bit disheartening I did not have a cat as a pet until I was in my 30s.

I was always told I was allergic growing up, and I could never spend time with any cats. I had no idea the joy I was missing.

While living in Washington state, I was able to rescue a kitty, which changed my life. I now enjoy all the craziness that goes with cats daily, and I love it.

Each of my cats has a different personality, and they are probably as weird as I am. They fit in perfectly at the house.

One thing I've noticed about them is they hate even the slightest change, which certainly was the case in late May when we decided to rearrange some furniture. Last summer was a scorcher, and the window air conditioning units we had were old and could not keep anything cool. We tried just about every trick we read on the Internet about keeping the house cool, but nothing seemed to work. It was miserable.

This year we saved up some money to buy a new air conditioner with many more BTUs. The unit would not fit where we had our "tv room," so we decided to switch furniture around to accommodate. The air conditioner has worked wonders in keeping the house cooler, but the cats were not fond of something as simple as switching out two couches and tvs.

They just ran around in circles for the next few days, confused and irritated. Despite the fact they were the same two couches they had known, they acted like we had moved them 3,000 miles and had replaced all the furniture.

It took about three weeks for them to settle down.

The cats had spots on the couches where they would sleep about 15 hours a day, but this changed when they moved. They had to pick out new places and were unhappy about it.

Just as the cats started to settle down a little bit and adjust to their awful new reality of the couch swapping, my mom decided to upgrade her "Roomba", and I was elated when she gave us the old one.

I had always wanted one, but with a tight budget, that was not something that ever inched toward the top of my list. I much rather be a little cooler with a new AC than have a robotic vacuum.

The morning after we got the Roomba, Melissa started it up, and chaos ensued. I thought the cats acted weird with the furniture, but it might have been worse with the new monster cleaning the floors. 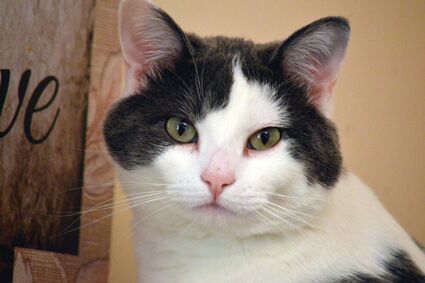 "Merfy" does not enjoy change.

Seeing them run under the bed to hide was quite the sight, only to have the Roomba join them a few minutes later. I also found myself trying to hide from the monster. The Roomba could be on the other side of the house from my desk, but the moment I sat down to type, it would come screaming towards where I was.

It never failed. I would sometimes leave the room when it came in and get a cup of coffee, and within seconds it was in the kitchen going for my feet.

The cats have started to settle down from the Roomba, but they certainly don't like it. If they could understand me, I'd like to tell them that the rest of the summer should go smoothly other than a few curse words from me when the monster interrupts my work.

I read about robotic lawn mowers the other day, but I'm afraid of what might happen if one of those follows me.