Murphy signs with University of Providence 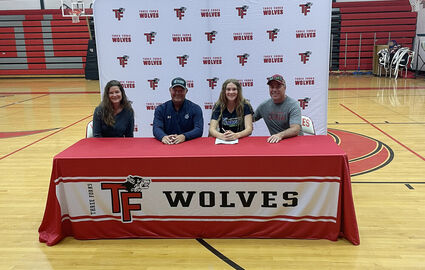 Three Forks standout Jasmyn Murphy signed a letter of intent last Friday to compete in track and field at the University of Providence in Great Falls. Voice photo by Jack H. Smith

After a storied track and field career at Three Forks High School, recent graduate Jasmyn Murphy will continue in the sport at the collegiate level.

The 2021 Class B Long Jump State Champion, Murphy signed a letter of intent last Friday to compete at the University of Providence in Great Falls.

Before signing, Murphy said she was a little indecisive, and it took a lot of thought about where she would attend next year and major in Physical Therapy with the hopes of getting a doctorate.

"Mostly, it came down to the best schooling and degree and the least amount of student debt. I happened to get the best scholarship from Providence, so I went with that one because the schooling was just as good as my other choices," she said.

One of the best long jumpers in the state, Murphy said that will still be her main event but also plans to again compete in a variety of events, possibly adding the heptathlon next season.

"I want to get better, compete well, and hopefully I can make it to nationals," she said.

Following her four years at Providence, Murphy plans to get her doctorate at the University of Montana or an out-of-state school.

Among those in attendance at the signing was Three Forks Head Track and Field Coach Tracy Welter, who described Murphy as an incredible leader. Welter said it was fun to sit back and watch how Murphy would do each competition.

"She is a great competitor and teammate. I think she will continue to improve and make a mark at UP," Welter said.