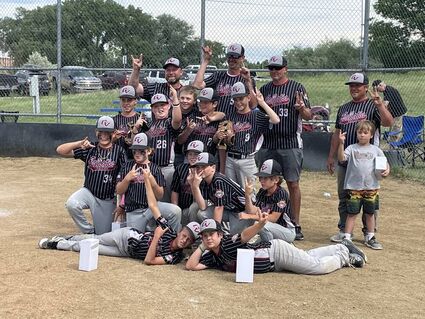 After making history last summer as the first team of Gallatin Valley All-Stars to win the state tournament, this group of boys and their coaches returned to the baseball field this summer and did it again, becoming back-to-back state champions.

With all the players and coaches from the championship team returning, plus a few additions, the team felt some momentum going into this season. They played five tournaments in six weeks, winning only the Wood Bat tournament in Belgrade before the state tournament in Helena.

"We wanted take each tournament as a building block to the state tournament," said head coach Zak Tesoro. "We wanted to peak at the right time."

At the state tournament GVO entered bracket play on Saturday having lost both their pool play games, one of them to Helena Earthquakes with a final score of 16-0. Bozeman, a team they beat at every other meeting this season, also beat them by one point (10-11) in pool play. GVO entered the single elimination bracket in the middle of the standings on Saturday.

Bracket play started with Kalispell, the team that knocked them out of the bracket with a tough game at the Firecracker Tournament in Kalispell the previous weekend. Their state tournament game lasted over six hours due to lightning and rain delays. But Jack Douma (Manhattan) and Tyzer Rains (Townsend) pitched five strong innings before Carsten Donnelly (Three Forks) came in to close it out with a final score of 10-2. Getting hits was also a key part of the win.

"Our approach to hitting was to be patient, to not be afraid to get two strikes," said Tesoro. "That made a big difference."

Championship Sunday began with the Kalispell Earthquakes, the same team that had beat them in pool play and had not had a single run scored against them up to this point. But GVO was ready. Douma scored the first run at the top of the first inning, and the team kept that momentum to make play after play behind Douma's pitching all the way up to the end, winning by one point.

"The boys kind of waited until the second day of the tournament," said Tesoro. "It took losing those games to figure some things out. Something just clicked."

To earn their spot in the championship game, the Bozeman Bucks 11U fought hard through their bracket, playing two games instead of one on Sunday before the championship due to the delays on Saturday. They came into the championship game fresh off two wins, ready for another. But again, GVO was ready. Both teams came out swinging, and the game was a one run game to begin the 4th inning. One of the Buck's high points was an impressive solo home run off the bat of Rayla Hyem.

"The way she was hitting, everyone knew she would do that eventually," Donnelly said. 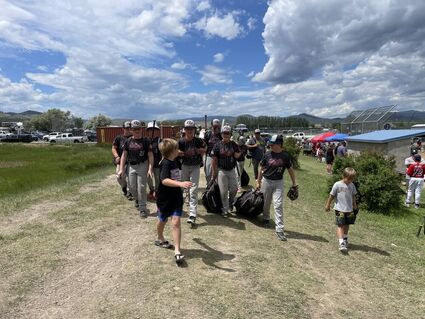 Walking to the field: The defending state champions walk to the field to defend their title.

Behind the pitching of Douma, Rains, and Jack Tesoro (Three Forks), the GVO team made plays in the outfield and infield, including some spectacular catches in the outfield by Tommy Edwards, Wyatt Tebay, and Tyce Wilkinson (Whitehall), a pick off at first base by Donnelly at catcher, and a double play from Luke Meissner (Amsterdam) from second to first, holding the Bucks to two runs, and ultimately running away with a 9-2 win.

With the state championship, the team earned their second trip to the Pacific Northwest Regional Tournament. This year it will be held in Kennewick, Washington on July 20-24. If you are interested in supporting the GVO 11U team, contact Kandy Johnson at (406) 599-2803 or come find them at the Three Forks Rodeo Parade and at the rodeo this weekend. They also have a GoFundMe page.