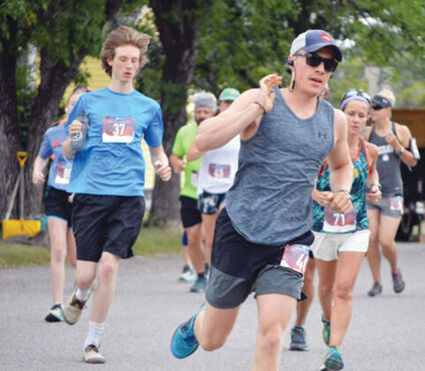 The Headwaters Bank run is set to return this Saturday. File photo

On Saturday, July 23, the Headwaters Bank Run will make its "COVID comeback" and take to the trails with approximately 100 runners.

Racers can still register to participate in a 5K, 10K and a half-marathon online or at the event for $30. Same-day registration will take place at Veterans Park in Three Forks, across the street from the Sacagawea Hotel parking lot. The half-marathon, which passes through the Headwater Trails System, starts at 7:30 a.m. while the 5K and the 10K starts at 8 a.m.

Pat Townsend, one of the event coordinators, told the Three Forks Voice that families are encouraged to participate, whether they walk or run the races. Although many runners use the bank run as an opportunity to train for another race, Townsend emphasized that the event is not just for individuals; It's for families and groups of friends too. "We just think it's a fun event," she said.

With two years since the last Headwaters Bank Run, Pat and her husband Gene Townsend are eager to get racers back in the Headwaters.

Earlier this month, the City of Three Forks received a $54,000 grant from the Montana Trail Stewardship Grant Program for the rehabilitation of the Headwaters Trail System, as reported in the July 6 edition of the Three Forks Voice. While the system has secured the funds for repairs, improvements won't take place before the run. To ensure the safety of runners, Pat Townsend and her granddaughters have marked holes and rough spots with red paint to warn runners. "We definitely do not want anybody tripping over anything," she said.

While Pat and Gene Townsend won't be running in any of the races, participants will see them actively participating in the set-up, operation and clean up on the day of the event. This includes waking up at 4:30 a.m. to place signs along the race paths.

Despite some bumps in the trail, Three Forks residents have committed to fill the 25 volunteer positions necessary for the event. "We've been pleasantly surprised at the response," Pat Townsend said.