On Monday, June 13, 2022, Helen Esther Lilly (née Neufeld), 81, returned to her Lord after an extended illness at home in Three Forks, Montana. She is survived and forever remembered by those who cared for her in her last years: son Chris Lilly and his wife Alexandra Alba, formerly of Phoenix, Arizona, and daughter, Alisa Flores, formerly of Lake Geneva, Wisconsin.

Esther was born a "war baby" in Winkler, Manitoba, Canada on October 12, 1940, before growing up in a treasured 1890s three-story Victorian wonderfully maintained by her carpenter father, Jacob, on Baltimore Road in Winnipeg. Her generational nickname was a fitting one: throughout her life she blazed a trail for women's rights in the workplace, fought to finally become a mother, and dutifully persevered with the tenacity to far outlast her dire initial health prognoses in her last year.

She adored family and shared her history of a pastoral upbringing in an austere Mennonite household on the Canadian Prairie. Many friends, visitors, hospice care workers-really anyone within earshot-were informed of the identities and personalities of each root of her family tree from old-country arrival up to the present-day.

In her youth, she was involved in figure skating, softball, curling, and was the social convener for the Winnipeg Ski Club, a member of Young Liberals, and the Winnipeg Canoe Club. She was principled but open-minded, working for the Nixon campaign in Kansas but spearheading environmental awareness throughout the west as chairperson for Keep Colorado Beautiful. This mercurial political compass defined her personality as well; one minute she was a battle-tested take no guff (as she would say) female CEO and the next a soft-mannered delicate little lady who loved chatting about news of the British Royals over some warm chamomile.

Esther was idealistic and bright on how she viewed the world. She was dynamic, a well-spoken go-getter, impeccably dressed; the incarnation of a 1970s feminist and working woman. With her grit and determination, Esther broke through the glass ceiling of the 1970s corporate work culture, becoming a beacon for women's representation and treatment in the oftentimes challenging dynamics of the boardroom of that time. Her wanderlust gained her the nickname "suitcase" from her family while her career ambition would eventually give her the title of CEO. Places like Winnipeg, Toronto, Wichita, Denver, and finally, Montana, hosted her career arc. She met the love of her life, fly-fishing legend Bud Lilly, when their paths crossed while establishing the International Fly-Fishing Museum in West Yellowstone, Montana. Despite both advancing in age, their love would not be deterred as they would go on to raise two young children in a love-filled home in Bozeman.

In 1985, Esther undertook a mid-life occupational change and became a real estate broker. She developed lifelong friendships with those to whom she showed and sold property, from working-class families seeking honest housing representation or to jet-set aspiring part-time Montanans in search of recreational riverside ranches. Her work ethic was ceaseless; she cultivated a thriving downtown Bozeman business and raised two young children while also pursuing intrinsic enrichment. To further her personal growth, Esther had no qualms sticking out as the grandma earning her EMT certification or as a non-traditional student at MSU taking detailed notes in her impeccable cursive. She astonished Bobcat football players who arrived on their first day of class to see a little old lady sitting there ready to take their football fundamentals course.

Esther kept an active passport and traveled often with her son, Chris, even into her later years: packing into the back of local Yucatecan combi-vans to view the jungle tableau of Mayan ruins or riding scooters through the Jeollanam-do seaside rice fields in Korea. No excursions were more significant, however, than those yearly summer sojourns to Manitoba to visit her cherished Canadian family. The Hillside Beach family cottage at Lake Winnipeg-constructed by her father and brother-in-law-served as a home base for generations of family to gather in the veranda feasting on pierogies while avoiding the infamous sparrow-sized black flies of the Canadian Shield.

In summers, Esther and Bud often packed their fly-rods, a lunch, and the kids into the old Suburban to scour the waters of Montana and Yellowstone Park for trout. In winters, Bud drove the gang up to Bridger Bowl to sit court in the Jim Bridger Lodge while Esther stayed active by skiing with the kids. As her age and diminishing health kept her from lifelong diversions, Esther spent her days visiting with Bud in their trout-décor living room or sitting together quietly in front of their home, chatting with friends and passersby. Here at "the retreat,"-a white-pillared 1910 saltbox lodge in Three Forks-they took in the snowcapped vista of the Tobacco Root range, occasionally remarking about a nice breeze. After Bud's passing in 2017, Esther found joy and escape in the many books she devoured-from guilty pleasure quick-reads on her tablet to deep-dive historical fiction paperbacks. As her children returned to take care of her, mornings dependent on coffee, gin rummy, and video chats with sister Diana in Canada were common. Evenings were spent with the dogs and family by her side, maybe a Broncos game or episode of Downton Abbey on TV, her unforgettable crescendo laugh growing with each generously poured glass of Pinot.

Esther is preceded in death by husband Bud Lilly, parents Jacob and Helena Neufeld, and sister, Shirley Hawryshyn, of Manhattan, Montana, and Winnipeg, Manitoba, respectively. Esther is also fondly survived by sister Diana Mittermuller and her husband Ronald, of Sidney-by-the-Sea, British Columbia, sister Jeanne Smallwood of Winnipeg, Manitoba, as well as many beloved extended family members across Canada and the United States. 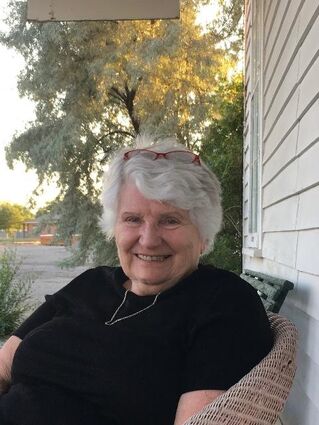 A celebration of life will be held at the Missouri Headwaters State Park picnic area near Trident, Montana on Saturday, July 30, 2022, at 10 a.m. Condolences and thoughts can be shared at PO Box 983, Three Forks, Montana, 59752. In lieu of flowers, the family asks that you donate to the National Center for Missing and Exploited Children on Esther's behalf.

Despite her diagnosis, Esther kept a positive outlook in all her interactions, with the daily affirmation of, "I'm a warrior, not a worrier." She lived her life to a higher standard while tirelessly bettering the lives of those around her. More than her achievements, she was selflessly devoted to her roles as mother, wife, sister, aunt, and grandmother. Her positivity, compassion, humor, and intelligence will not soon be replaced or forgotten in our hearts. We will love and miss her always and forever.

See you in the funny papers, momma.