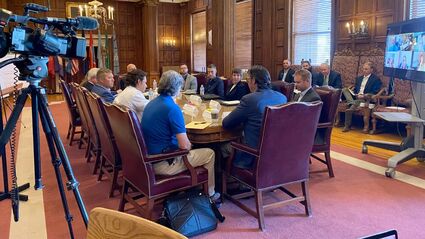 As Gov. Greg Gianforte described the job facing his newly convened housing task force Wednesday, he made a point of asking the group's 26 members to think outside the box as they spend the next several months working to identify the root causes of Montana's housing crunch and propose solutions for consideration by the governor and state Legislature.

"When it comes down to it, the health and well-being of all of our families, and our communities, our businesses, our economy, rely on affordable and attainable housing," Gianforte said. "And right now, finding affordable, attainable housing is a massive challenge in Montana."

It's an open question, though, how far the group, which includes representation from across Montana's political spectrum but has been convened under the auspices of a thoroughly Republican-controlled state government, will go to consider ideas that don't align with conservative orthodoxy on housing policy.

Democrats and progressive housing advocates, for example, have called for dramatically ramping up state spending for subsidized housing programs, and floated ideas such as a real estate transfer tax or laws intended to discourage investors from snapping up modestly priced properties that could otherwise provide residents with starter homes.

Gianforte, however, has framed the focus of the housing task force primarily around regulatory relief, asking members to identify actions state government can take to minimize the expense and hassle involved in getting new housing developments permitted. The governor says the state's fundamental housing problem is that home construction has fallen behind population growth, allowing purchase prices and rental rates to be driven up by supply and demand.

While acknowledging that housing affordability is a complex issue without a single-bullet answer, Gianforte argues that a key piece of the solution, then, is to make it easier for private-sector developers to build Montana out of its housing crisis.

"Strict zoning and other housing supply regulations are really a wet blanket on construction, on responsible development. They increase costs and limit supply," the governor said Wednesday. "We've got to get government out of the way, where we responsibly and safely can. We need regulations for public safety and to protect the environment, but in other areas we need to figure out how to streamline."

The executive order that launched the task force, Gianforte's most explicit public action to tackle the housing issue since he took office at the beginning of last year, also references supply chain issues, rising construction costs, labor shortages and underbuilding of starter homes as factors contributing to the housing crisis as it has grown over the past decade.

The order asks the group, chaired by Montana Department of Environmental Quality Director Chris Dorrington, to produce two written reports: A first, with an Oct. 15 deadline, recommending bills that could be considered by the Legislature as it meets next winter, and a second, with a Dec. 15 deadline, recommending specific "regulatory changes and best practices" that could be adopted by state agencies and local governments.

According to the text of the order, those reports are supposed to focus specifically on expanding Montana's construction workforce, reforming land use regulations, and reforming zoning restrictions.

Even so, Gianforte concluded his opening remarks at the group's initial meeting by saying he wants to have a "light touch" on the task force's work. Additionally, while some of the group's initial public discussion hinged on construction industry frustrations with state regulatory agencies, some also veered beyond the bounds of a strict focus on cutting red tape.

Missoula-based task force member Adam Hertz, for example, said he's currently developing a 39-apartment project that has been held up for months by an overdue engineering review at the Department of Environmental Quality. He's frustrated, he said, that current state law requires DEQ to conduct a duplicative review of sewer and water main extension plans that have already been thoroughly vetted by city engineers.

"I've been sitting for two and a half months waiting for that so that I can break ground while construction costs go up," Hertz said.

A progressive housing activist named to the task force, Shelter WF co-founder Nathan Duggan, took to Twitter before the meeting to argue for measures such as a transfer tax on luxury real estate and a vacant home tax, that latter of which he'd like to have limited to unoccupied properties in urban areas in order to avoid taxing hunting cabins.

Another task force member, Sen. Greg Hertz, R-Polson, joined the resulting thread to note that real estate transfer taxes are explicitly banned by the Montana Constitution, a provision added through an initiative championed by the Montana Association of Realtors in 2010.

Some commenters who weighed in during the public comment portion of Wednesday's meeting also warned against thinking about the housing issue too narrowly in terms of just making construction easier.

"If we reduce the cost of construction, that does not guarantee that the developer will use that savings and pass it along to the homeowner in a hypercompetitive market," he said.

Bozeman, along with Whitefish, had zoning policies in place prior to last year's legislative session generally mandating that new developments include some homes that meet city-designated price targets, but saw those programs nullified by a 2021 bill Gianforte signed into law.

The effectiveness of housing affordability mandate policies is debated in housing policy circles, with critics arguing they constrict development and force market-rate buyers to bear the cost of selling price-controlled homes at below-market prices.

Dorrington, the task force chair, said he ultimately hopes to have the group compile its findings in a format similar to the Montana Climate Solutions Plan produced in 2020 by a task force convened under former Gov. Steve Bullock. That report's format, he noted, included space to summarize dissenting opinions in places where members of that task force weren't able to agree on a consensus position.

In the short term, Dorrington plans to have the task force split into subcommittees focused respectively on construction, local issues, regulations, and economic factors. The full group is scheduled to meet again the first week of August.

This article was originally published by http://www.montanafreepress.org.