Wrestling under the lights August 6

Area wrestlers will get a chance to "wrestle under the lights" on August 6 at the Keith Pierce Memorial Folkstyle Tournament at the Three Forks High School football field.

According to tournament director Shaun Hungerford, this is the third time Friends of Three Forks Wrestling has hosted the event.

"The kids enjoy wrestling outside. Usually, wrestling happens in the winter, and there aren't many opportunities to wrestle in an outdoor setting," said Hungerford. "I think wrestling under the lights is a pretty cool concept. Everyone that has come to it in the past has always said they will come back the next year." 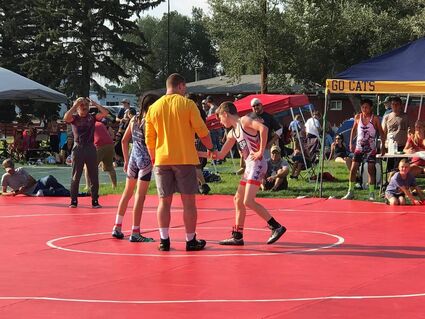 The entry fee is $10 per wrestler, and admission is $7 for adults and $5 for students. Those five and under get in for free. Concessions will also be available. Awards include custom singlets for first place and medals for second to fourth place.

"All in all, it should be a great time to watch some wrestling and have some fun. Also, to help support a great cause. The proceeds go to the Keith Pierce Scholarship fund," Hungerford said.