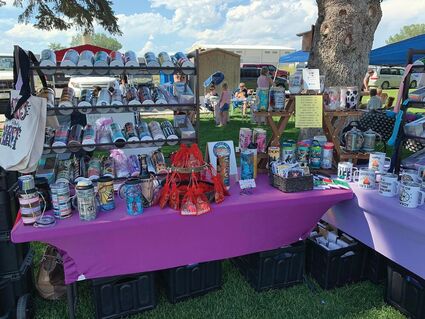 Custom by Cups by Kim is a regular at the Three Forks Farmers' Market.

While pursuing the Three Forks' Farmers' Market, visitors will come across a booth featuring custom tumblers made by a friendly face.

Kim Lazoff, the founder of Custom Cups by Kim, started crafting several years ago after learning how to create each item by watching YouTube videos. After watching a video about sublimation – the process of printing a pattern onto a solid material using ink and heat – Lazoff decided to give it a try, despite not having the tools to do so.

"I love the process and being able to create custom items for those looking for a special 'gift' or who want a custom tumbler just for themselves," she said.

Although Lazoff had experience with a variety of craft types, she decided to scale down and perfect her crafting of custom tumblers.

According to Lazoff, her one of a kind creations allow customers to communicate their personality with others. "It's important to be able to express yourself in many ways, one of those ways is what you carry your beverage(s) in," she said. "It might seem silly to some, but for others, it's important to have cute things to carry around."

While she now only produces custom tumblers, she diversifies the practice by searching for the next new cup style. "I'll often buy a case to try out and if they go well, then I'll add it to my online store," Lazoff said. Those interested in seeing new tumbler styles – along with product discounts – can visit the Custom Cups by Kim's Facebook page.

At the moment, Lazoff is the sole employee of Custom Cups by Kim; however, she said she would love a part-time helper assisting her with an event while she is at another. Lazoff said she will likely expand and hire toward the end of the year or by next spring.

Customers can purchase Custom Cups by Kim at the Legacy Trading in Three Forks, The Best of the 406 Marketplace in the Gallatin Valley Mall, the Emerald Dragon Company in Four Corners and The Off-Grid Artisan in Phillipsburg. Orders can also be placed at customcupsbykim.com.

During the summer months, Lazoff sells her pieces at the Three Forks and the Gallatin Valley farmer's market. Lazoff recently participated in the street vendor fair during the Three Forks Rodeo. She plans to man a booth at the Manhattan Potato Festival on Aug. 20 and the Summerfest Sip and Shop Craft and Vendor Market in Helena on Aug. 12 and 13.

"I enjoy attending and selling at some of the big events around the area during the summer and winter months," Lazoff said.

Lazoff got into crafting after leaving her corporate job due to medical issues. Although she attempted to return to office work and create cups on the side, Custom Cups by Kim is now her full-time job, allowing her to work from home. "It's great to stay home with the dogs and work the hours I want to work. My hours might not be ideal for all, but I love working late at night," she said.

Lazoff credits the success of the business to her husband and her parents who have encouraged her to "shoot for the stars." 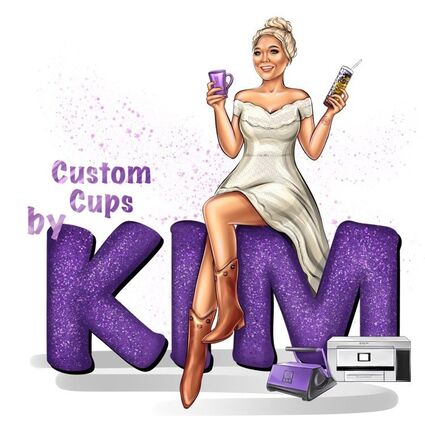 Lazoff moved to Bozeman from Washington four years ago for her husband's work. After settling in, Lazoff and her husband began exploring the neighboring towns. "We both immediately fell in love with the sweet little town of Three Forks," she told The Voice. "We knew we wanted to be a part of that community."

Lazoff said they had to look for their forever home further out of town to find a more affordable option. Although Lazoff is not a "real local" she said the community has still welcomed her to town. Lazoff said she hopes Three Forks' small town feel doesn't "get lost" in the area's recent growth.

"I'm a new business owner living my best life in an amazing community," she said.