How you can avoid causing Montana's next big wildfire

For more than 70 years, Smokey the Bear has had the same message for us: Only you can prevent forest fires.

The U.S. Forest Service's Cooperative Forest Fire Prevention Program, also known as the Smokey Bear Program, was created to prevent human-caused wildfires. In Montana, the Department of Natural Resources and Conservation reports 75% of wildfires as human-caused. Montana Free Press talked with experts about the most common things humans do that start wildfires and what people can do to uphold Smokey's message.

Julia Berkey, DNRC's wildfire prevention program manager, said the most common version of human-caused wildfires differs based on where you are in the state.

West of the Continental Divide, campfires are generally the biggest cause for concern and the second most common wildfire ignition source across the state.

Regardless of whether fire restrictions are in place, Berkey said a fire should never be left unattended and should be put out before abandoning it. DNRC promotes a "drown, stir, drown, feel" test, that involves pouring water on the fire, mixing up the embers, watering it again, and doing so until the fire is cold to the touch.

Berkey said in some cases people just pour a bucket on the fire and think it's good to go. The fire might die overnight, Berkey said, but as the next day warms and maybe a breeze picks up, the embers could reignite.

Burning leaves, tree branches, grass and debris leftover from farming, ranching or gardening is the most common way humans start wildfires across Montana.

A big reason people choose to burn debris accumulated on their property is part of a fire mitigation strategy that DNRC promotes. Thinning trees and pruning shrubs around homes can decrease the chances of a fire burning to the tops of the trees, where once reached it becomes harder to put out, Berkey said. Prescribed burns on Forest Service land are one way of achieving this goal, but on smaller residential properties, thinning vegetation and burning it in piles is more appropriate. It's not a bad way to reduce risk, Berkey said, but, if done incorrectly, it could increase risk.

Burning piles of debris requires a burn permit during wildfire season, and as fire season intensifies, counties often place bans on getting such a permit. If you do get a permit, Berkey recommends burning earlier in the day, when it's cool and wet, and checking the forecast for any wind that may cause the fire to escape the burn pile. Berkey also recommends burning smaller piles to mitigate any potential bigger fires, and to always have water and a shovel nearby while constantly monitoring the burn pile. As with campfires, Berkey said the fire is only considered out if the debris is cold to the touch.

Patrick Gilchrist, a meteorologist for the National Weather Service in Glasgow, said harvesting crops in the early morning or later in the evening can help reduce equipment-caused fires. He also said carrying water or a fire extinguisher can be useful if a small fire does start. 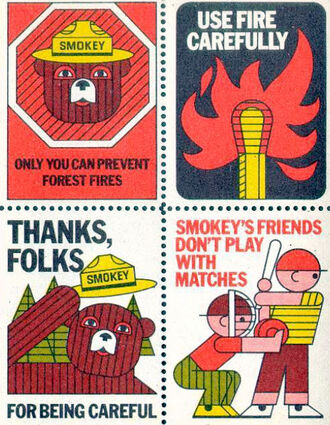 With agriculture the predominant industry in NWS Glasgow's vicinity, which includes northeastern Montana, Gilchrist said these equipment-started fires are common every year.

Fire plays a natural role in the ecosystem, Berkey said, so a fire started by a lightning strike can have some benefits. She added, however, that "Fire ignited by debris burning with a whole bunch of houses around, it's a lot harder to see the benefits that we get from something like that."

"Be careful and use common sense," Gilchrist said. "If there are restrictions in place, respect those fire restrictions to make sure you can give the firefighters a break."