Men of character: High expectations on and off the field for Wolves football 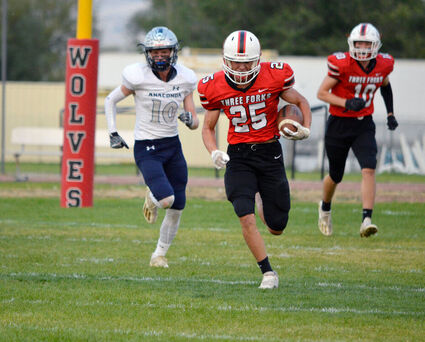 Entering his fourth season as head coach of the Three Forks High School football team, Connor Sullivan has high expectations for his players, both on and off the field.

The first focus Sullivan has for his players is to be men of character.

"We show up to class, we sit in the front row, we take notes, and we pay attention," Sullivan said.

Secondly, Sullivan wants his squad to continue to support and encourage one another from the classroom to life, and finally, the football field.

"Third, attacking everything we do with our best effort. In the classroom we better pay attention and study. On the football field we will finish the rep, every single play. And lastly, always competing. Throughout life you're always competing for something. (friends, yourself, relationships, or a job interview) we don't want the kids to get complacent. There's always someone out there trying to take your spot," he said.

With fall camp nearly complete, Sullivan said they are excited to get out and play a game.

"We know we have a few things to clean up first before we get to that point, but yes, I think the kids are itching to play," said Sullivan. "I love our energy and focus. We're not looking ahead. We're taking it one day at a time. Kids are competing and challenging one another."

After jumping from one win in 2020 to three in 2021, Sullivan felt the offseason weight program was a huge success.

"A bunch of kids came in every day and busted their tails to get bigger, faster, and stronger. One of our assistants, Casey McWethy was the head strength and conditioning coach for all sports this summer. He got those kids in shape and did a fantastic job," Sullivan said.

The 2022 season will be the first class of seniors Sullivan has coached since their freshmen year. He had high praise for returning seniors Reid Woodward, Parker Prentice, and Ezekiel Miller. He added Kamden Carr is new to the team for his senior season.

"These seniors have been there since the beginning. They're a great group of kids. They put their hard hats on and come ready to work each day. We expect them to make a big impact on our team on both sides of the ball," Sullivan said.

The Wolves will also return a talented junior class, with many gaining valuable playing time and highlights throughout last season. In a 33-7 last fall over Anaconda, sophomores had a massive night for Three Forks, with Colten Hayder breaking loose for a 95-yard touchdown run on the first play from scrimmage, Tallyn McCauley throwing three touchdown passes, and Shane Williams getting a critical interception.

"These incoming juniors have so much game experience under their belts. They have been fantastic thus far and will continue to grow throughout the year. I've seen a ton of maturity in that class. They get after it and love to compete," Sullivan said.

Along with the strong group of juniors and seniors, Sullivan said Sawyer Andersen, Dylan Andersen, and Josh Barnett didn't miss a day of lifting throughout the summer.

"You can see how that translates onto the football field. They have popped up on film and are showcasing what they can do in camp so far. They're going to have a tremendous year as incoming sophomores," Sullivan said.

Looking toward the season opener on August 26 at Red Lodge, Sullivan said the coaching staff has watched film and shared their thoughts, and this week will get the kids in the film room and start to digest the game plan.

"But we don't want our kids thinking about what Red Lodge has. We have to focus on ourselves and what we can do to go 1-0 each rep. Deliberate practice and focus on each rep. We have to take care of ourselves first, and then we will let the chips fall where they may," he said.