Not only was the Three Forks High School Volleyball team able to gain valuable experience with 12 two-set matches in two days at last week's Choteau Tournament, but they also shined on the court, finishing in fourth place. 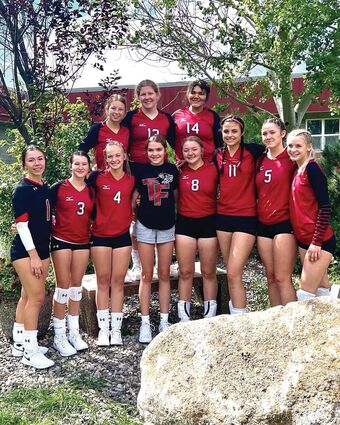 "We are so excited about our finish at the tourney. We played a lot of great teams and were very competitive," said Head Coach Shann Mack. "For the most part, we played incredibly consistent throughout the two-day tournament. We continued to get better in our serve receive and defensive system, which allowed us to be successful."

With a packed schedule in Choteau, Mack said everyone that suited up was able to play, and the staff was happy with the way the team competed.

With league play opening this week, Mack said the conference is really tough, so the Wolves need to take things one day at a time. The schedule this week for Three Forks includes road games August 30 at Boulder, and September 1 at Manhattan.

The Wolves open their home season September 15 against Townsend.