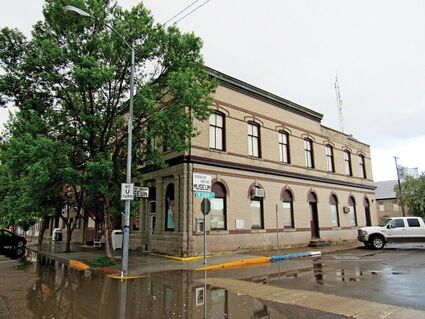 An ice cream social and 40th anniversary celebration is planned for September 11 from 1 p.m. to 5 p.m. at the Headwaters Heritage Museum.

The social and celebration are scheduled on Saturday, September 11, from 1 p.m. to 5 p.m. in the museum's backyard at 202 S. Main in Three Forks.

According to historical society member Pat Townsend, the event will include not only ice cream and cake but also entertainment. Mayor Randy Johnston will be speaking, and society treasurer Patrick Finnegan has put together a collection of music to be played.

Townsend encouraged residents to come out and enjoy the celebration.

"We want people to come out and have a very nice afternoon," she said.

Forty years ago in July, the doors of the Headwaters Heritage Museum were first opened for visitors at its new location at 202 South Main Street. It was July of 1982. It must have been an exciting moment for those who were involved in obtaining the building. Previously, they had just a few exhibits in two rooms of the Sacajawea Hotel.

Constructed in 1910, the building was first known as the Three Valleys State Bank until 1918. Then, it reopened as the American National Bank of Three Forks, which, in 1923, also failed. It was used for several businesses in the following years that included the Climbing Arrow Ranch office, Montana Power Company and the Bacon and Kilgore Insurance Company, to name a few. During this era, the upstairs rooms were offices of dentists, doctors and attorneys. By 1960, it became a bank again...the First Security Bank of Three Forks. But, after two decades, they moved to a new site, and the building became available in1981.

The Three Forks Area Historical Society purchased the building in February of 1981 and immediately began various fund-raising drives. Donations from local and former citizens of Three Forks and surrounding communities and a grant from the Montana Arts Council helped the effort. Then, a generous donation in 1983 was received that allowed the Society to have completely paid their debt of $35,000 in less than two years. The building has now been a museum longer than a bank and is on the National Registry of Historic Buildings.

The rich history of the Missouri Headwaters area is contained in this building...an anvil that is possibly the oldest in Montana, a 29 ½ pound brown trout, a piano dating to 1866, two exquisite stained-glass windows and much more. Upstairs (which opened in 1983) is a barbed wire display in the hallway with different nostalgic scenarios in each room, including a display of Willow Creek artifacts. 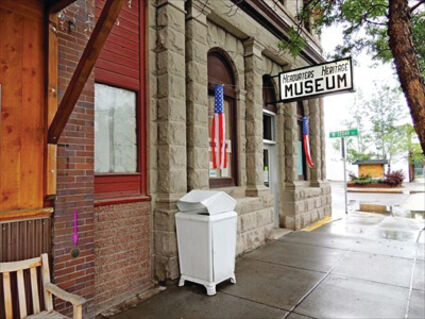 Today, it is still the support of the community and the many visitors to the museum that keep the doors open. No admission is charged, and no funds are received from city, county or state revenues. Instead, because of generous donations, memorials, membership dues, sales in the gift shoppe and, most importantly, an all-volunteer staff, the museum has been able to be open and accessible to all.

The Society has also expanded to include more of our area's history in an historic Northern Pacific Railroad depot museum, the Railroad and Trident Heritage Center, containing a wonderful collection of railroad and Trident artifacts. Admission is free and is open Tuesday-Saturday, 9 am-5pm.

The museum is open through September 30 and the hours are 9 am to 5 p.m., Monday-Saturday, and Sunday, 11 a.m. to 3 p.m. The Society's website is http://www.tfhistory.org and contact email addresses are [email protected] or [email protected]