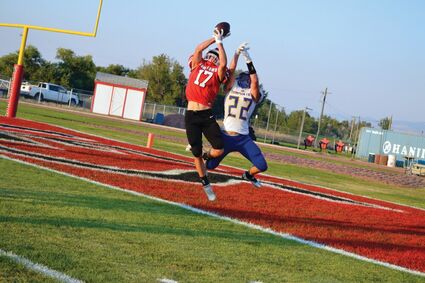 Colten Hayder skies high for the interception in the first quarter of the 30-8 win September 2 over Thompson Falls. Voice photo by Melissa Jenkins

For the second straight week, the Three Forks High School football team used a dominant second-half performance on their way to a 30-8 home September 2 win over Thompson Falls.

Now 2-0 on the season, the Wolves have outscored their first two opponents 36-0 in the second half.

Three Forks head Coach Connor Sullivan praised the play of his defense and said playing physical has been key to the early season success that has seen them give up only 14 points in eight quarters.

"Coming out and playing physical definitely makes a difference. They are a resilient group. If something goes bad, they usually tend to come back and make things right on the next play," he said.

After a scoreless first quarter against the Blue Hawks that included a leaping interception by Colten Hayder at the goal line, the Wolves opened the scoring on a 22-yard touchdown pass from Tallyn McCauley to Reid Woodward. After a successful two-point run by Shane Williams, Three Forks would take an 8-0 lead with 10:01 left in the first half.

Thompson Falls would answer back to tie the score with 1:39 left in the first half, but a swarming Wolves defense would hold them scoreless the rest of the way.

Sullivan said they want to emphasize 11 "hats" flying to the ball.

"The more, the merrier is what we like to say," he said.

Three Forks would score three times in the second half, the first a five-yard run by Williams, who also ran it into the endzone for a two-point conversion to push the lead to 16-8 with 6:14 left in the third quarter.

The Wolves also scored on a three-yard pass from McCauley to Hayder and a one-yard Williams run.

Sullivan credited Thompson Falls for coming in and giving them a different look up front but said they went into halftime and made some adjustments.

Sullivan added he is proud of the team's effort but wants them to work on coming out fast in the first and second quarters.

"You have to play four quarters of football, and that's what we tell them at halftime. You want to come out and play football and be ready to go," he said.

Three Forks (2-0) will open their conference season on the road on September 9 against Townsend (1-1).

"We will ride this momentum going in, but we still know we have stuff to clean up, and it was evident tonight. Broadwater is a great opponent, so we need a great week of practice and focus to get ready for them," Sullivan said.