At the onset of the recent COVID-19 pandemic, I would cringe whenever I would go to the store and see people loading up their carts with toilet paper. I had no idea why everyone thought they needed excessive amounts, and it was frustrating when I needed a couple of rolls and could not find any.

I remember seeing a friend in Las Vegas posting a picture of him waiting outside in what was similar to a "Black Friday" line so that he could purchase a package. It was a really strange time, and I am so glad time has passed and I can at least find toilet paper when I need it.

I guess the unknown scared a lot of people. I just am still baffled why toilet paper was the top need at the time.

While we did not do much "panic" buying, I have to shake my head and laugh at how Melissa and I reacted earlier this year when Hung Foy Foods announced there would be a Sriracha shortage that could last into the fall.

After so many times of being frustrated about the lack of toilet paper and a few other items, we had a ridiculous reaction to the news about our favorite condiment.

Since the first time I tried Sriracha on a cracker with butter at the Sand's Café, I have been hooked and use it on just about everything. While I'm probably not likely to put it on cheesecake, there isn't much I eat without it.

Melissa gets a bit crazier with the bright red condiment that has become a staple in many households. I'm pretty sure she would put it on a peanut butter and jelly sandwich if she was the only one home and probably has.

When we heard the news that the shortage was going to occur due to weather conditions affecting the chili pepper crops, we freaked out. Of all the craziness that sometimes goes on in the world -- we were flabbergasted by the news.

We happened to be driving to Butte when I first saw the news and when I told Melissa, and she looked like she was going to cry. After a few quiet minutes over Homestake Pass, we devised a plan.

Perhaps it was thinking that everyone enjoys it as much as us and goes through quite a few bottles annually or not taking enough time to get all the pertinent information. We stopped at Safeway, where I ran in, fully intent on clearing the shelves. I was horrified when they did not have any, so I told her to get to Walmart as quickly as possible to see if there was any left.

I seriously thought everyone in southwest Montana would have the same idea as us, so I ran into the store as quickly as I've moved since high school. 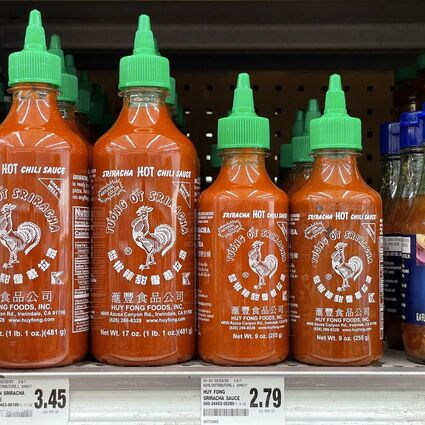 It turns out there was plenty of Sriracha, but that didn't stop me from buying four gigantic bottles. I thought I would have to fight people off running through the store with my arms full, but I don't think anybody cared.

Fast forward a few months later, and we have used only one, and the second one barely has a dent. And it's not like we are not using it every day, and the bottles are just big enough to last a long time.

While there certainly has been a dent in the supply chain for the item, you can still find it.

As much "crap" as I gave people about toilet paper purchases, here I am with 2.75 bottles of Sriracha that we really didn't need. I don't know what the shelf life is for it, but I think we are probably set until mid-2023. Since we have that much Sriacha, we might need a bit more toilet paper.