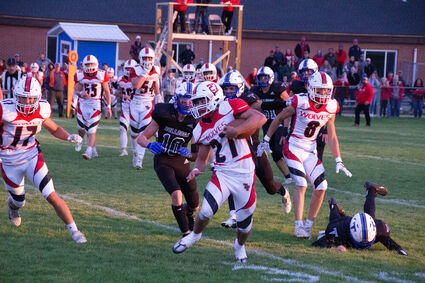 The Three Forks High School football team will look to bounce back from their first loss of the season with a Friday matchup at home against conference foe Whitehall.

The Wolves (2-1) were defeated 35-6 last week at Townsend. Trailing 20-0 in the third quarter, Three Forks battled back to cut the lead to 20-6 on a Sawyer Andersen touchdown run before the Bulldogs scored two touchdowns in the fourth quarter to secure the victory.

Wolves Head Coach Connor Sullivan said the defense played their tails off all night, and the kids competed and were focused, but they need to get things going offensively.

"Our defense battled all night, but we need to compliment that with our offense. We will go back this week and clean some things up," he said.

Playing against the high-powered Townsend offense Friday, Sullivan thought the defensive line had a great game and said they set the tone up front and were getting great pressure all night. He added Shane Williams also had a big game at linebacker, finishing the night with 12 total and two tackles for loss.

Andersen led the team in rushing with 59 yards on 11 carries.

Looking towards Friday's matchup, Sullivan said the Trojans like to throw the ball around.

"We need to start fast on offense and play physical up front on defense. Hurry the quarter and force some bad throws," he said.