The Three Forks Area Ambulance service is in desperate need of volunteers.

With their current number, board member Barbara Mutter has dire concerns with the size of the service area, the rise in population including southern Broadwater County, and how this could affect response times.

Mutter said in an interview at the ambulance barn last week they currently have 14 volunteers at the service a number that has continued to drop since the onset of the COVID-19 pandemic. She added of the 14, two are currently on leave, and three are drivers.

Mutter said she has not only seen a drop in the local numbers, but this is happening across Montana and the entire United States. She added in the past year, six smaller services in the Treasure State shut down not for lack of equipment but instead a lack of volunteers.

Mutter is hopeful many new residents will recognize that Three Forks does not have services on every corner, they rely on volunteers, and is hoping this will encourage them to join.

In the summer, the Three Forks Ambulance District was dissolved, and they are working as a 501c(3) non-profit entity. Mutter said they rely on grants, donations, and transports for their funding. She added with transports they usually only get 30 percent back out of all their calls from insurance companies. She also wanted to dispel any rumors the service had closed and encouraged people who want to know what is going on to contact her or attend a board meeting. Mutter added they are looking to add two new board members to oversee operations and finances. The board meets on the second Monday of the month.

In the past few months, Mutter said she had been pleased with some of the grants they have obtained for ambulances, technology and other equipment, but she is still very concerned with the lack of volunteers.

Three Forks Area Ambulance is currently backed up by AMR of Bozeman. Mutter lauded their assistance but said their response time is longer, and this could make a considerable difference is something like the "golden hour" for someone who has had a stroke.

Mutter would also like more volunteers for the service area of around 500 square miles, which includes portions of Gallatin, Broadwater, and Jefferson Counties.

"This could be your family. We just really want people to realize that we do not have enough volunteers," she said. 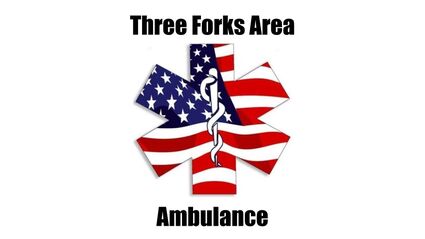 During last week's interview, Mutter was optimistic they could put together an EMT training in Three Forks if they could get a few new volunteers. A possible fundraiser is also being discussed to raise money for the training class. She was also ready to head over with an EMT to be on the scene at a Three Forks Junior Varsity football game. She said they would also be at the John Colter Run, one of the many events they cover. Personnel are also on scene at other middle school and high school sport events.

"It's all about patient care," said Mutter. "TFAA tries to have an EMT presence at football, volleyball, and basketball games to support our youth."

For more information about joining, contact Mutter at 406-209-3417 or [email protected]