Meridian Bridge construction could begin as early as this fall

Construction on a new Meridian Bridge could begin as early as this fall.

According to Jefferson County Commissioner Chair Cory Kirsch, the governing body received an update on the new bridge from Kathy Thompson of Stahly Engineering at a meeting last week at the Willow Creek Fire Hall. The new bridge will replace the current two-span steel truss bridge constructed in 1914. The existing bridge on Meridian Cemetery Road near Willow Creek spans the county line between Jefferson and Gallatin Counties.

Kirsch said bids were opened last Tuesday morning, and Battle Ridge Contracting was the low bidder coming in at $1,796,232.50.

"It sounds like they want to try to start the project this fall. The only concern they have with starting too early is the possibility of a delay in the availability of the concrete beams. The existing bridge will likely just be recycled due to the high cost of removing and transporting it," Kirsch said.

Kirsch added they have a five-month window to complete the project once construction begins.

The 267 feet long by 18-foot-wide bridge currently serves around 103 vehicles per day. 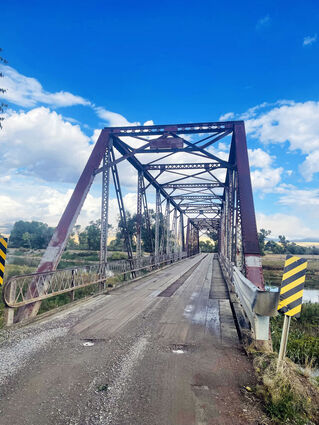 Pictured is the Meridian Bridge near Willow Creek. Construction on the replacement of the bridge could begin as early as this fall. Voice photo by Jack H. Smith

In the application for the TSEP grant, deficiencies listed for the bridge were:

* The posted weight limit on the bridge is nine tons.

* The bridge is too narrow for two-way traffic.

* The steel truss has moderate corrosion throughout, with areas of pack rust.

* Intermediate pier columns are split at the top and leaning to the south.

* North abutment has exposed rebar on wing walls and undermining of abutment wall.

* Moveable bearing on the southeast corner of the bridge has no room for expansion.

* Timber deck has minor checking and extensive wear on the north half.

* No approach rail is present.