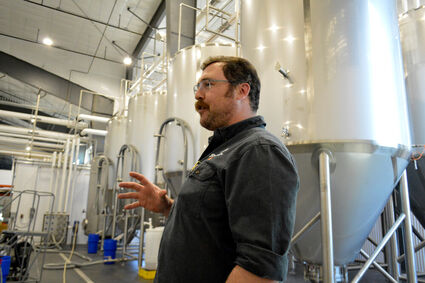 The Sustainable Brewery Certification (SBC) was started as a pilot project in 2020 by Bridger Brewing Director of Operations Daniel Pollard, Last Best Planet, and the Montana Manufacturing Extension Center (MMEC). The project was one of several in the Treasure State to receive EPA grant funding for Pollution Prevention. The SBC assessment and certification system will identify and promote best practices for the statewide industry to improve overall environmental sustainability.

"Bridger Brewing's new state-of-the-art facility and the expertise they bring to pollution prevention and sustainability offers an example for breweries across the state," said EPA Public Affairs Specialist Rich Mylott.

According to the Project Narrative provided by MTP2, in March of 2022, over 100 breweries were operating in Montana, producing 219,074 barrels of beer per year, with most in the 5:1 water usage rate with over 30 million gallons of water being used to produce six million gallons of beer.

In a presentation to EPA officials and other guests last week, Pollard discussed the significance of breweries using water responsibly.

"It's important, and it's only going to get more important in the west. We are thankful to have a federal agency like the EPA that is a cloud behind us that can come in and drive change, can lead by example, and give us the support we need," he said.

"With no national standard or environmental sustainability scoring system that is relevant to Montana brewery needs, and with existing resources at the national level geared toward larger operations, it makes it difficult to determine key focus areas for driving sustainability improvement and charting paths for breweries to reduce impacts of their operations as well as to assist consumers in differentiating between environmentally sustainable and unsustainable breweries," states the narrative. "The pilot project (phase 1) is ongoing, and a framework is being established for a tiered environmental sustainability and Pollution Prevention assessment and certification system (i.e., bronze, silver, gold, platinum) using brewing-industry specific benchmarks and criteria. Upon completion, this certification may be awarded to breweries that successfully implement, track, and report on Pollution Prevention practices."