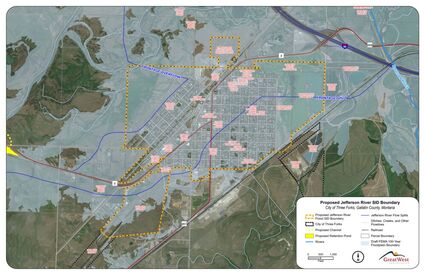 Pictured is the SID Boundary.

Property owners within the proposed Jefferson River flood special improvement district can expect a $194 increase in their taxes to help cover the city of Three Forks' flood mitigation construction costs, after the city council passed a resolution of intent to create such a district and selected a per parcel assessment method during its Sept. 27 meeting.

Three Forks city officials plan to construct a $5.5 million flood diversion channel, which will redirect flood waters from the Jefferson River away from the current floodplain.

After receiving notice that the city's project was selected for further review for a $4.15 million FEMA grant in August, the council is preparing to form a special improvement tax district to fund the remaining 25% of the project cost.

During the Sept. 27 meeting, the council selected a per parcel tax assessment method, following recommendations made by the council and members of the public at the meeting.

The per parcel method taxes all lot owners in the district by the same amount, which according to Great West Engineering is the simplest method of doing so.

These residents can also expect to pay an annual maintenance fee to cover costs associated with "routing mowing and weed control to assure the channel maintains the required capacity for flood protection," according to Great West Engineering's technical memorandum.

This fee will vary from $20 to $50 and will remain after the loan is paid off.

When one member of the public questioned why the city would charge this fee prior to construction being completed, the council said it would not be applied to residents' taxes until they are needed to conduct the necessary tasks.

The city mailed notices of intent to create the special district to residents within the boundaries this week. "These should be in your mail mid-next-week," read a City of Three Forks Facebook post on Oct. 1.

The special improvement district boundary includes most of the Three Forks' city limits, but excludes portions of the Ridge View and Airport Rd area. Although some county properties will benefit from the flood mitigation project, the city excluded these properties from the district for simplicity's sake, according to Jessica Salo from Great West Engineering.

Council President Gene Townsend said he favored the project as it would solve a significant problem for the town. "The floodplain has been a real problem for the city of Three Forks for a number of years," Townsend said during the meeting, adding that the severity of the problem has grown over the years.

Affected property owners have 17 days from first publication, or Oct. 22, of the notice of intent to file a written protest with the city.