There was some exciting recent news with construction completed on the Headwaters Trail System.

Work that has been finished includes the removal of tree roots and old pavement, correcting damage from a Cottonwood Tree, and repaving.

"It's very exciting and a long time in the making. In the past, we have done a little crack sealing, but some of the older parts of the trail are 20 years old and needed some rejuvenating," Townsend said. 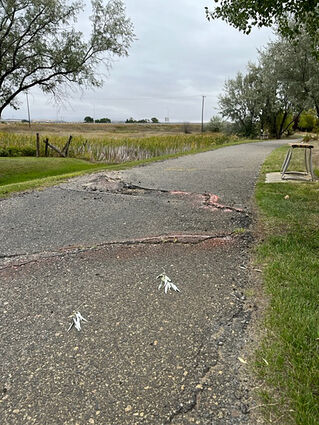 Recent work on the Headwaters Trail System included removal of tree roots and old pavement, the correction of damage from a Cottonwood Tree and repaving. Pictured above is a before picture of the damage. Below is a picture of the completed work.

Along with a better experience for those utilizing trail, Townsend was also thrilled about making the route safer.

"I was really happy about getting rid of the tree roots along the trail, which will make the trail safer for people to walk and run. I am really satisfied with what has happened," he said.

In July, the Montana Fish, Wildlife & Parks announced the City of Three Forks would receive a $54,000 Montana Trail Stewardship Grant Program (TSP) grant for use on the trail system.

Along with the TSP grant, Townsend was very thankful to everyone who donated to the Headwaters Trail System.

"One of the things that makes me happy is that over the years, we have received a lot of donations and memorial donations to the trails. We've been building this money up," he said.

Over the years, Townsend said they have received grants, but the work could not have happened without matching funds from businesses like Magris Talc.