A draft report released last week by Gov. Greg Gianforte's housing task force details a slew of ideas to boost housing supply in an effort to tackle Montana's affordability crunch, previewing legislation that could be advanced by the governor and lawmakers during next year's legislative session.

Several of the task force's recommendations involve scaling back local zoning restrictions such as minimum lot sizes, building height limits and parking requirements to make it easier to develop more dense housing developments in urban areas with existing access to services like water lines, streets and fire departments. The report calls for legislation that places "sideboards" on the development restrictions towns and cities have the power to enact and also suggests providing financial incentives to local governments that implement "key regulatory reforms."

The task force, which is set to formally present its recommendations to the governor in the coming weeks, is looking for public comment to consider as it finalizes its initial report by an Oct. 15 deadline. Members of the public can weigh in through the task force website, deq.mt.gov/about/Housing-Task-Force.

Gianforte announced the task force in July, tasking it with identifying strategies "to increase the supply of affordable, attainable workforce housing." As the group began its work this summer, he directed it to focus on regulatory relief measures that could make it easier for the state to build its way out of the housing crunch, but also asked task force members to "leave no stone unturned."

Montana's housing market, like markets across the country, has become increasingly tight in recent years as remote work-fueled migration during the COVID-19 pandemic overloaded the state's available housing stock. As a result, purchase prices and rents have been driven above levels that are affordable for many working Montanans.

Real estate website Zillow says the typical home value in the state was an estimated $457,000 in August, up from $289,000 at the beginning of 2020. A poll commissioned by University of Montana researchers this spring reported three-quarters of Montana respondents considered lack of affordable housing an "extremely" or "very" serious issue.

Gianforte has faced criticism in some corners for running a signature state workforce recruiting campaign, his "Come Home Montana" effort, while the state grapples with a housing crisis.

Efforts to lower housing costs have been proposed by groups to the governor's right and left, as well. A group of hardline conservatives floated an unsuccessful ballot initiative this year that would have tried to control homeownership costs for existing property owners by capping property taxes. (The measure was opposed by the governor, labor unions, and major business groups.) Minority Democrats, for their part, have called for spending a portion of the state's budget surplus on a massive $500 million state investment in subsidized housing.

The governor, however, has doubled down on his diagnosis of the housing challenge as fundamentally a supply-side issue that should be tackled primarily by letting the private sector build additional housing until the market reaches a more tolerable equilibrium.

"Strict zoning and other housing supply regulations are really a wet blanket on construction, on responsible development. They increase costs and limit supply," the governor told the task force in July. "We've got to get government out of the way, where we responsibly and safely can. We need regulations for public safety and to protect the environment, but in other areas we need to figure out how to streamline."

Specific recommendations in the report include the following:

• Banning single-family zoning in cities of 50,000 residents or more (Billings, Missoula, Great Falls and Bozeman) by mandating that they permit duplex, triplex and fourplex housing on any lot where single-family residences are allowed. The task force also recommends a similar requirement for duplex housing in cities of 5,000 residents or more. This proposal mirrors House Bill 134 proposed during last year's legislative session.

• Considering rewriting the 1970s-era Montana Subdivision and Platting Act to "front-load" public participation in high-level planning efforts and streamline reviews once specific projects are proposed. By reducing the number of public hearings required for proposed developments in some situations, that change would make it harder for neighbor opposition to derail projects that comply with adopted high-level growth plans.

• Allocating immediate funding to the state DEQ in an effort to remedy staffing shortages that have made the agency struggle with promptly reviewing subdivision and public water supply applications. The report says some housing projects have been forced to wait as long as 12 months for DEQ permit approval.

• Putting more money into existing state housing programs administered by the Montana Board of Housing.

• Authorizing some state entities, such as the Montana University System, to sell public land at below market prices in order to subsidize housing development. The report stresses that this proposal would exclude sales of state trust lands, Montana Fish, Wildlife and Parks property, and federally managed public lands.

The report also says lawmakers should consider adjustments to state tax laws in an effort to incentivize housing development and reduce how much property tax burden is placed on residential homeowners. However, it notes that task force members weren't able to reach a consensus about specific policies that would do this.

Additionally, the task force suggests the state publish more information about where AirBnB-style short-term rentals are being operated, but explicitly avoids proposing restrictions or limitations on the practice.

The report notes that its proposals to limit local zoning power have been criticized by local government leaders, who generally argue it's better to let city, town and county governments make land-use policy at the community level than set "one size fits all" policy through the Montana Legislature. 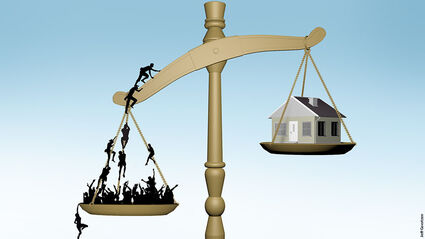 The draft report, detailing ideas that could be implemented by lawmakers next year, will become the first of two formal recommendations the task force will submit to the governor. Agency staff supporting the task force said this week that public comment will be considered as the report is finalized in advance of its Oct. 15 submittal deadline. A second report, set to be finalized in December, will detail administrative actions Gianforte could take through state agencies.

The current draft report also includes a listing of second-tier ideas that were discussed by task force members but didn't make the group's cut for formal recommendations. Those include levying taxes on out-of-state property owners, enacting an outright ban on parking space requirements, and requiring that local building codes treat manufactured homes like site-built housing.