The third-seeded Wolves will open the 5B District Tournament Thursday at 9:30 a.m. with a matchup with sixth-seeded Whitehall. The winner of the match will advance to play second-seeded Boulder at 1 p.m. (Full bracket can be found on page 14 of the print version of the Voice.)

"Our goal was to finish better than we did last season, and we did that. I think any tournament is about staying consistent and competitive. These two day tourneys can be very long, so we just need to stay together, trust our training and leave it all on the floor," Mack said. 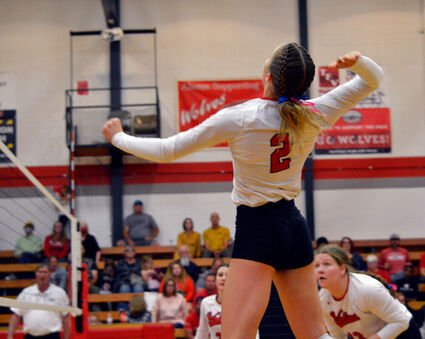 Natalee Hayder preps for the ball in action earlier this season against Whitehall. Voice photo by Melissa Jenkins

According to Mack, the coaching staff was super impressed with how the squad played against Ennis.

"Obviously, the outcome was not what we had hoped for, but there were a lot of great highlights. Cheyenne Cavin was amazing. She finished with 19 kills and 20 digs. We had a lot of kids step for us. Freshman Mikayla Lear had six blocks. Ali Kotter had a great match with 19 digs," said Mack. "Big Timber was a bit of a struggle. It was our third new rotation in about five days. Also, senior night is always an emotional night."

Cavin had 11 kills, 17 digs, and one block against Big Timber. Senior Morgan Carr had a huge night with 27 digs, one block, and 21 assists.