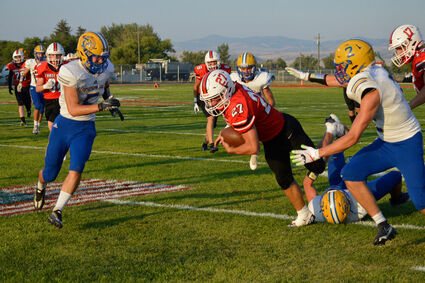 Shane Williams had a fantastic junior season for the Wolves Williams is one of the many experienced players who will return for next year's Three Forks High School Football team.

With a wealth of returning talent, the future is plenty bright for the Three Forks High School Football team.

While the Wolves missed out on the playoffs in the 2022 season with a 2-6 record, Head Coach Connor Sullivan felt the team competed in all three phases of the game, and he could see on Friday nights the culture of the program was starting to shift in the positive direction.

"I know the win/loss column wasn't where we wanted to be, but we've got better. Now we have to build on this foundation," said Sullivan. "Next year should be the first time since I've been here that we primarily have all upperclassmen playing varsity. I'm excited for these guys. We have to put the work in now, through spring and all summer."

When Three Forks opens the 2023 season, they will do so with multiple returning starters on both sides of the ball. Sullivan said the returning players will know what playing in the Southern B Conference is all about.

"It's a challenging task in this conference, week in and week out, and you have to be ready to go each week. We're going to lean on the upperclassman next year and have them mentor some of these younger kids on what's expected and continue to build on the culture we have set," he said.

Looking towards the offseason that will lead up to 2023, Sullivan feels it is always good for the team to get out in the summer and work on their craft at camps.

"Just putting the cleats on and heading out to the field helps. It's something we harp on the kids with. Get involved and be active. By doing this, whether it's team camps or individual camps, it gives you an advantage going into the season," he said.