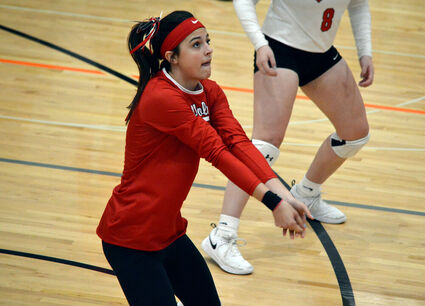 The season ended last week for the Three Forks High School Volleyball team at the 5B District Tournament in Manhattan.

Head Coach Shann Mack was happy with how the squad started against Big Timber but said they did not play consistently enough to extend their season.

"There were definitely moments our kids could have quit, but they didn't. So, super proud of the fight," Mack said.

It was a phenomenal night against the Herders for junior Fallon Page, who set the school record with 50 digs.

"Fallon had an outstanding night for us. She finished with 50 digs, which I have never seen as a head coach of Three Forks. I believe she just edged Heather Wilson from our 2017 season, who had 44 digs against Boulder. Very excited for her to set the new school record. She is such a hardworking kid, and I am so happy for her. She's got one more year left, and I can't wait to see what she does next season," Mack said.

Following the tournament, Mack said districts and part of the season did not go as planned.

"Likewise, by no means what these kids went through was easy, but I am really proud of their fight. We faced a lot of adversity, uncertainty, and unexpected changes. So, to still be competitive at the end of the season says a lot about the resilience of this group. I am so proud of the kids in our program and proud of them for sticking the hard times out. Like I told them in the locker room, all the highs and lows are moments they can use and build upon and learn from for next season and for situations outside of the gym," he said. 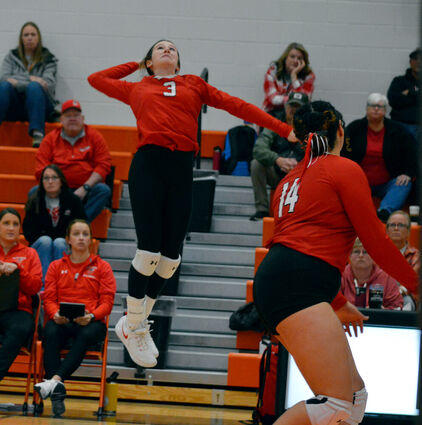 Tanaya Hauser flies high at the 5B Tournament.

"Super proud of our seniors for leading the fight and persevering. Hannah did a great job this week coming and serving aggressively, and because of that we were able to stay in a lot of games," said Mack. "This was only Morgan's second year as a setter, and her improvement from last year to this year was remarkable. And, because of our changes, she had to hit for the first time in two years this week and showed she can do it all. She has been an incredible leader, athlete, and example of what it means to be a kind, hardworking human being."

Looking towards the future, Mack said the team had many young kids step up for them in 2022 who showed a lot of potential.

"There were times this week we had three freshmen and two sophomores on the floor. So, lots of good things coming for the future," Mack said.