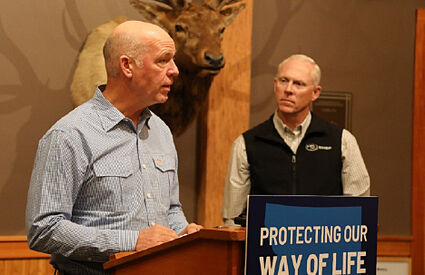 Gov. Gianforte sharing his continued focus on improving access to and management of public lands.

"Protecting our way of life means protecting things that make Montana, Montana. Our rich outdoor heritage, vast public lands, and abundant natural resources are a few of them, and we have an obligation to protect them for the generations that follow us," Gov. Gianforte said in a press conference. "I look forward to working with our partners, in the legislature and across the state, to increase access to and better manage our public lands."

The governor pointed back to his inaugural address in January 2021, when he laid out four core principles to guide the work of his administration. Among the four is protecting Montana's way of life, including its public lands.

"How do we do that? Well, we've got to be good stewards of the lands we have," the governor said. "Montanans don't want to climb over and around dying, dead, and downed timber when they're hiking or hunting. Unfortunately, on too many acres of land, folks have to do that."

The governor described his administration's ongoing focus on active forest management. Last year, the state more than doubled the number of forested acres in treatment.

"We can't do it alone though. We need our partners at the table," the governor urged. "In the year ahead, we'll continue to work with our partners to bring more state, federal, tribal, and private forested acres under active management."

Beyond forested lands, the governor also provided an update on the modernization of the state's 27-year-old drought management plan. The overhaul, which will help Montana better meet drought challenges, will be completed next spring.

"As we better manage our public lands for the 21st century, we're also increasing Montanans' access to them," the governor stated.

The governor touted several successes in office to increase public access, including on the lower Yellowstone River.

Working with the legislature last year, Gov. Gianforte secured $4 million in funding to invest in increasing access to the Lower Yellowstone River Corridor (LYRC). The LYRC Advisory Committee, a citizen group which the governor sponsored and the FWP convened, provided recommendations on how to best use the funds to increase access.

"The best part about that project was its bottom-up, grassroots approach," the governor said. "The more involved local, impacted communities are, the better the outcomes."

"If we can identify access deserts on the lower Yellowstone, why can't we do it on every navigable river in the state? There's no reason why we can't, so we are," the governor said.

Under the leadership of FWP Director Worsech, the agency is mapping access deserts on every navigable river in Montana. The findings will inform the state's strategies to increase access to waterways.

The governor also celebrated a recent public lands victory, with the state's purchase of a 5,677-acre ranch in Golden Valley County from Shodair Children's Hospital. The acquisition will create the Big Snowy Mountains Wildlife Management Area, and will provide Montanans' access to over 100,000 total acres of state and federal lands which were largely inaccessible to the public.

"Not only does this land offer exceptional hunting opportunities, with excellent habitat and access to the Big Snowies elk heard, it will also remain available for cattle grazing," the governor noted, emphasizing the importance of keeping ranchers on the landscape.

Kyle Weaver, president and chief executive officer of the Rocky Mountain Elk Foundation, praised the purchase, saying, "When we talk about access, as the governor said, we're not just talking about any access, we're talking about safe, truly accessible access, and that's the key to this project. This is a huge win for all of us here."

The governor's press conference was the fifth in a series of events to unveil priorities ahead of the upcoming legislative session which will convene in January.