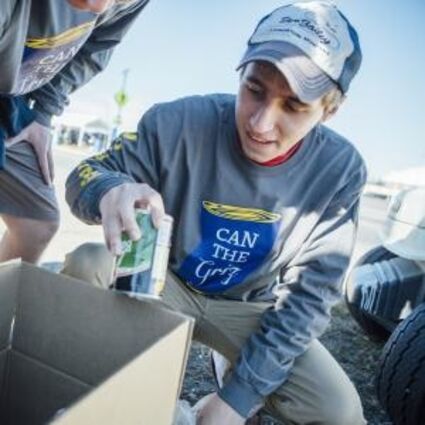 Montana State University and Gallatin Valley communities pulled out a win in the 23rd annual Can the Griz food drive, with supporters donating the equivalent of 613,054 pounds of food to the Gallatin Valley Food Bank and MSU's Bounty of the Bridgers food pantry.

Can the Griz - and the corresponding Can the Cats food drive in Missoula - is an off-field competition between MSU and the University of Montana to see which school can collect the most donations for its local food bank. The competition is held each year as part of the celebration of the Brawl of the Wild football game between the two rival schools.

This year, MSU and Gallatin Valley communities donated 207,854 pounds of food and $405,200, according to Kim Cleary in the MSU Office of Student Engagement, which coordinates Can the Griz. Pounds and dollars are added together for the contest, resulting in a total this year of 613,054 pounds donated. The Can the Cats food drive in Missoula brought in the equivalent of 428,022 pounds of food for the Missoula Food Bank, Cleary said. MSU and the Gallatin Valley communities have won the competition 19 out of the 23 years it has been held.

"We are so thrilled to have secured our 19th Can the Griz win," Cleary said. "It is so inspiring to see both the Bozeman and Missoula communities come together to support their friends and neighbors in this especially difficult year. At the end of the day, we are all winners when people are being fed and the people who run our local food banks have the resources they need to continue to serve individuals that need their support."

The donations from Can the Griz will help the Gallatin Valley Food Bank, as well as the Bounty of the Bridgers food pantry, provide food for families in the community through the spring and summer. The Gallatin Valley Food Bank is one of the HRDC Food and Nutrition Programs' Initiatives. The Bounty of the Bridgers, housed in the Office of Health Advancement, is a student-driven initiative to combat food waste and food insecurity on the MSU campus for students, faculty and staff.

Donations to the food bank may still be made. Donation information is available at canthegriz.com.