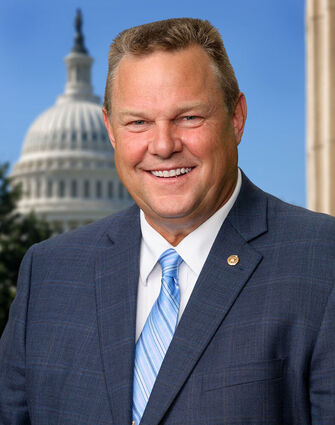 Fentanyl overdoses and seizures by law enforcement are rising at an alarming rate in Montana.

In an effort to protect Montana communities from fentanyl and strengthen the border, U.S. Senator Jon Tester (D-Montana) is asking Congressional Leadership to include the Securing America's Borders Against Fentanyl Act in the Fiscal Year 2023 National Defense Authorization Act.

According to Tester, the bill he is co-sponsoring would require the Department of Homeland Security, along with other relevant agencies, to research and develop technologies and strategies specifically aimed at targeting and detecting illicit fentanyl before it can be trafficked into the United States.

"The problem with drugs, and fentanyl is one of the worst, is that it just destroys families. And if you destroy families, you destroy communities," Tester told the Voice. "This stuff comes in, and your costs for everything go up because crime increases, abuse increases, and it rips apart families."

The Securing America's Borders Against Fentanyl Act would provide $20 million to develop new technology to target and detect illicit fentanyl being trafficked into the U.S, enhance targeting of counterfeit pills and illicit pill presses through nonintrusive and other visual screening technologies, and strengthen data-driven targeting to increase seizure rates of fentanyl.

"Fentanyl use has spiked in Montana over the past five years, and in addition to making sure our state and law enforcement are fully equipped to fight this problem, it is critical we do our best to stop fentanyl trafficking at the source," Tester said.

On a local level in Three Forks, Tester said the problem with having an interstate flying through your community is there suddenly becomes access to fentanyl.

Montana Attorney General Austin Knudsen said earlier this year there is no question that fentanyl is now the number one public safety threat facing Montana.

"I've put additional resources into the fight against drugs and crime in Montana and will continue my efforts alongside other law enforcement agencies to keep our communities safe," he said.

According to a release from the State of Montana Newsroom, the Rocky Mountain High Intensity Drug Trafficking Area (RMHIDTA) task forces, which includes the Montana Department of Justice's narcotics bureau and state Highway Patrol criminal interdiction teams, seized 61,000 dosage units in 2021. The number through August 30 of 2022 is over 137,000, nearly twice the fentanyl seized in the previous three years combined. The release also stated that deaths due to fentanyl have increased, up 1100% since 2017.

U.S. Senator Steve Daines (R-Montana) has repeatedly addressed the fentanyl crisis in the Treasure State, with massive concerns about the southern border.

"Fentanyl is the leading cause of death among young adults nationally, and it is the number one public safety threat in Montana. The fentanyl crisis tearing our communities apart is the result of Biden's wide-open southern border. We need swift, meaningful action to combat this epidemic – that includes cracking down on the criminals distributing it," Daines said.

The longtime senator also wants to hold CEOs of social media giants accountable for their role in the fentanyl crisis.

In September, Daines and a group of fellow senators penned a letter to the CEOs of Instagram, TikTok, Snap Inc., and YouTube. The letter asked for answers on what they are doing to curb the drug epidemic to prevent the sale of fentanyl-laced pills to teenagers and young adults on their platforms.

"We write to you today regarding reports that the use of your social media platforms has been linked to the sale of fentanyl-laced counterfeit pills that have caused the deaths of teens and young adults across the country. In light of the devastating rise in drug overdose deaths in the U.S., especially linked to fentanyl, we are requesting more information regarding steps your companies are taking to protect children and crackdown on illegal drug sales on your platforms," the Senators wrote. "Social media platforms like yours provide a convenient venue for dealers to anonymously and discreetly peddle these counterfeit pills to a young audience. With 4 in 10 of these pills containing a lethal dose of fentanyl, more and more of these online transactions are ending in tragedy."

"Fentanyl-related activity is at never-before-seen levels, and it's impacting communities all across Montana," Gianforte said.

The Governor also discussed the importance of treatment for those struggling with fentanyl or other substances.

"Substance use treatment and prevention programs are some of the best defenses we have to the fentanyl crisis," the Governor said. "And I want folks to know – if you know someone trapped in addiction, there are services available to help them. Reach out to us, and we'll get them plugged in," Gianforte said.

Fentanyl seizures and overdoses are rising at alarming rates in Montana. DEA photo

Montana Superintendent of Public Instruction Elsie Arntzen and Knudsen discussed the rise in overdose deaths in Montana during Red Ribbon Week in October.

"One pill can kill. With illicit fentanyl pouring across the border and into Montana, it's more important than ever for parents, guardians, teachers, coaches, and anyone else who has contact with school-age kids to talk to them about how to avoid fentanyl and the importance of staying drug-free," Knudsen said.

When discussing the challenges of drug use by students, Arntzen said Montana students are resilient even though they have experienced challenges over the last few years.

"One of my main initiatives as Superintendent has been Montana Hope, which focuses on family and community engagement. I am confident that with educated awareness, our students will strive to make healthy choices," she said.