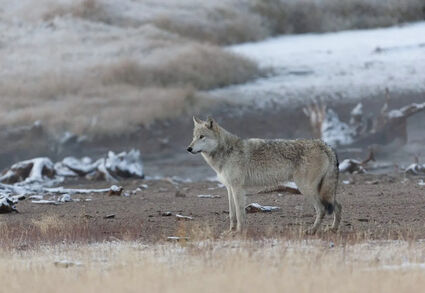 Plaintiffs WildEarth Guardians and Project Coyote had filed suit against the commission and Montana Department of Fish, Wildlife and Parks on Oct. 28. They argue that laws passed by the Legislature and regulations adopted by the commission run counter to the public trust doctrine enshrined in the Montana Constitution, which requires the state to manage natural resources like wildlife to preserve them for future generations.

In a Monday hearing, the environmental groups presented testimony from three witnesses who outlined their concerns about liberalized regulations, how the state and the commission weighed wildlife advocates' comments as they developed those regulations, and the integrity of the model FWP uses to estimate the state's wolf population. They also argued that the state has not produced a new wolf management plan in 20 years despite direction from the 2002 Montana Wolf Conservation and Management Planning Document to review the plan every five years and said current quotas for areas near Glacier and Yellowstone National Park harm federal interests by allowing hunters and trappers to kill wolves that the National Park Service is charged with protecting under the Organic Act.

Lawyers representing the state questioned whether plaintiffs' witnesses possessed adequate expertise to speak to the particulars of the state's wolf population modeling program and argued that the public has had plenty of opportunities to weigh in on wolf management in the last two decades. They also suggested that FWP has little flexibility to offer substantively different regulations given the 2021 state legislature's directive to reduce the state's wolf population and legalize the use of neck snares.

Nearly half of Monday's hearing was devoted to the particulars of the improved patch occupancy model, or iPOM, which uses a formula based on occupied wolf habitat, mean pack size and mean pack territory to estimate the number of wolves in Montana. Plaintiff witness Francisco Santiago-Avila of Project Coyote argued the model's design and inputs lead to an overestimation of the state's wolf population and said the agency should be using other methods to replace or supplement iPOM data such as pack counts conducted in the field and genetic sampling.

At one point during the nearly seven-hour-long hearing, state attorney Sarah Clerget asked Michelle Lute, a witness for the plaintiffs, if other states use the iPOM model to estimate their wolf populations. Lute responded that it's recently been green-lit for use in Wisconsin and later noted that Wisconsin is in the process of rewriting its wolf management plan after Project Coyote and others brought similar administrative procedure claims before Wisconsin courts.

Abbott wrote that he didn't find the criticism of the iPOM model persuasive enough to side with plaintiffs at this stage in the case. He wrote that "the Court is not persuaded that iPOM is so unreliable or so substantially tending to overestimate wolf populations that the Department and Commission's reliance on it while this litigation pends is likely to trigger irreparable harm to wolf sustainability."

Abbott also wrote that none of the witnesses testifying "presented any evidence that wolf populations are such that this hunting and trapping season - if permitted to continue as established by the Commission - will cause a decline of wolves to anything near the sustainability level."

In an emailed release about the decision, WildEarth Guardians carnivore coexistence advocate Lizzy Pennock said plaintiffs will "keep fighting for Montana's wolves in the courtroom while our case carries on and outside the courtroom in every way possible."

The lawsuit comes as the Biden administration weighs reinstating federal protections for gray wolves. In September of 2021, the U.S. Fish and Wildlife Service examined petitions to restore Endangered Species Act protections to gray wolves of the West and determined that there was enough evidence to merit closer study of gray wolves' viability, due in part to wolf management frameworks in Idaho and Montana. That assessment was supposed to be completed within a year but is still ongoing.

This article was originally published at http://www.montanafreepress.org