Three Forks High School Boys Basketball Head Coach Terry Hauser always looks forward to the start of a new season, and this is certainly the case as the defending Class B State Champions open the 2022-23 season.

"It's always exciting for a new season to start, no matter what the circumstances. Losing eight seniors makes it even more interesting because we don't know for sure who will step up and be ready to fill those crucial roles of the seniors we lost last year. I'm not going to lie, it's also a bit nerve-racking as well, not knowing what to expect," Hauser said.

After the first few weeks of practice, Hauser feels things have been going great.

"To be honest, it's been encouraging to see how hard the kids are working and competing. We might not be as explosive of a team this year but one thing that's apparent is their willingness to be competitive, work hard and be coachable every day is a huge plus because if they can keep it up even through adversity, we will continue to improve and be in a great spot come tournament time," he said.

Junior Shane Williams is the team's top returning scorer from last year's team and will have a considerable role for the Wolves during the 2022-23 season.

"Shane is the only player we have back that played quality minutes for us last year. His role is going to change as we are looking at him to take on a leadership role this year," said Hauser. "As a coaching staff we are excited and optimistic about his ability to lead us on and off the floor. He will carry a much heavier load for us on the offensive side of the floor as we will look for him to score a bit more for us this year." 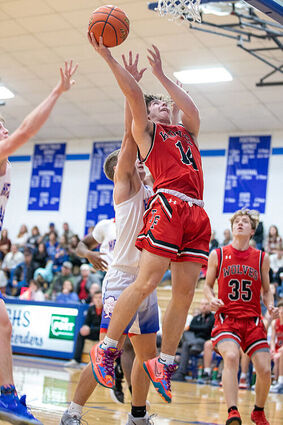 Shane Williams is the leading returning scorer for the Wolves.

"Those guys that got to sit on the bench all year and be a part of that spectacular run learned a lot by being a part of it. They are also hungry now that it's their turn to maybe hoist a trophy in the air at some point in their careers. A lot of them also got minutes during the season as we had quit a few games where we were up enough to play them the whole 4th quarter, sometimes even late into the third as well," Hauser said.

After a season-opening matchup on December 6 at Manhattan Christian, Three Forks will head to Shelby for a December 9 game against high-powered Class C Belt and a December 10 game against Fairfield.

"That's a pretty heavy load for us right out the gate, but we are excited, and I just want the kids to work their tails off and compete," Hauser said.