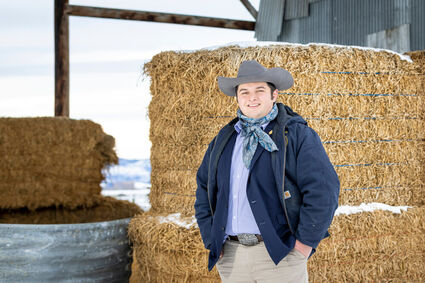 When asked about his extracurricular involvement at Montana State University, senior Tyler Noyes paused to remember the long list of groups he's been a part of.  Four years of activities adds up.

There's the College of Agriculture Ambassadors, Agriculture Education Club, Alpha Zeta and Montana FFA Ambassadors program, not to mention the Boardroom Bobcats, Collegiate FFA, Collegiate Young Farmers and Ranchers and the College of Agriculture Student Council. Some students would have difficulty staying on top of their studies with that much involvement, but for Noyes, leadership has driven him since he was a child in 4-H and FFA in Broadwater County.

"I just have a real passion for service. I love helping people. I love being one who can contribute his knowledge and abilities to get something done," said Noyes, who grew up on a farm in Toston. "I just always felt a huge need that if no one else will, then I will step up to the plate and take on the role. I know I have the skills and do a good job, and if you have the mindset 'I can do it,' then it's pretty easy to go forth."

"We are so proud of Tyler and the strong legacy he will leave on the College of Agriculture," said MSU Vice President of Agriculture Sreekala Bajwa, the college's dean. "Through his various leadership roles, dedication to education and knowledge of the importance of agriculture to Montana, Tyler is a perfect representative of our college and university as a whole. We wish him well in his future endeavors."

Noyes initially came to MSU to study agricultural business, intending to use his skills back on the family farm or in the industry. But while taking an ag education course, Noyes said his instructor told him he believed Noyes would be a good teacher and encouraged him to follow that path. For Noyes, his majors pair nicely for teaching, as he wants to teach ag business and vocational courses to high school students.

Along with teaching, Noyes is eager to be involved with coaching local FFA chapters. He was a founding member of the Broadwater FFA chapter at his own high school and competed in and won several contests. Noyes said FFA is an incredible extracurricular activity that helped him in many avenues, from networking with students and businesses across the state to being inspired by hard-working individuals in leadership positions.

Noyes recently finished student teaching in Sheridan, Montana, where he also helped coach the chapter's career development events, which incorporate real-life skills such as ag sales, extemporaneous speaking and parliamentary procedure. While his students did well in competition – his speaker took second place at this year's Montana FFA Ag Expo and the sales team performed well – Noyes said he was most proud of having a brand-new student join the team and broaden his horizons. According to Noyes, the student was initially skeptical to join the sales team, but after the expo said he is hooked on competition.

"I couldn't care less if he got dead last in competition, but the fact that he said he had fun and wanted to keep doing it is pretty exciting," Noyes said. "He has a lot of potential, and I think he is really starting to see that, which means that I've done my job to help him discover that potential. I love coaching kids and being able to pass on knowledge and see them make a difference."

Carl Igo, head of the Department of Agricultural and Technology Education, knew Noyes before he became a student at MSU, from his high school FFA involvement. Igo described Noyes as respectful, responsible and courteous, citing his trustworthiness and capacity for reflection.

Igo was also the field adviser for Noyes and observed him during his student teaching in Sheridan. He recalled how Noyes modeled the good qualities he sought to instill in his seventh-grade students, both in the classroom and beyond.

"When I first watched his class, they acted like typical seventh-graders, asking why they have to do this or that," Igo said. "The last two or three times I observed, the students were more like, 'Mr. Noyes I am done with my project; I am going to get a broom and start cleaning up.' Just him modeling that behavior made such a difference ... When Tyler saw his kids, he was able to reflect back the positivity he saw in them in a way that they began to see it in themselves. They became better citizens because of it."

As Noyes' time at MSU comes to a close, he is looking toward the future. He will serve as a long-term substitute teacher in Livingston and has already started shadowing his future class, preparing to make a difference in students' lives.

"MSU offered me the understanding that there is a whole world outside of my small Montana town, and I've met people from numerous backgrounds, with different thoughts and ideas, which I find especially important for teaching," Noyes said. "I've learned to work and listen to different perspectives because that's how I'm going to shape my future as a teacher. I need to be open and flexible in my teaching to any type of student that walks through my door."