Remote participation is here to stay, moderates and hardliners squabble, free conference committees get sideboards, and more from a long day of parliamentary action. 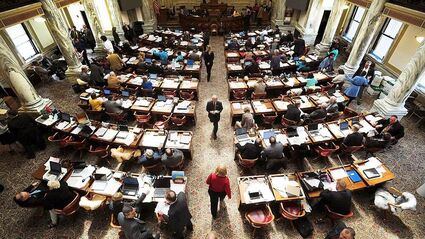 Lawmakers kept the lid on simmering conflict between Republican factions Tuesday and passed amended versions of the rules that govern legislative procedure and decorum in advance of formal votes that will codify those rules in the opening days of the 2023 session.

Tuesday's process proved a far cry from the fireworks of last session, lawmakers say, when debates over COVID-19 precautions and intra-party feuding raised the specter of a last-minute leadership change and resulted in the House entering the 2021 session without new rules adopted.

"It was obviously a lot less contentious than last year," said Sen. Steve Fitzpatrick, R-Great Falls, who presided over the Joint and Senate rules committees. "I thought we had good, respectful discussion and we moved through everything relatively quickly."

Determining how to incorporate last session's COVID-19 measures was among the first orders of business for the joint committee, which ultimately voted to continue the practice established in 2021 of remote public participation and to eliminate the COVID-19 response committee created for that session. Lawmakers will still have opportunities to participate remotely, though the Senate Rules Committee voted unanimously that, unlike the 2021 session, members will have to be physically present at the Capitol to vote unless excused by their party's leadership.

"I think it looks bad when we have a chamber full of empty desks," Fitzpatrick said in committee.

The policies passed by the House, Senate and joint legislative rules committees Tuesday are not yet binding. In effect, the three committees drafted a pre-introduction version of the rules resolution that lawmakers will vote on in committee and on the floor in the early stages of the session, which starts Jan. 2.

Each chamber has its own rules, generally based on precedent and tradition, Mason's Manual of Legislative Procedure, statute and, ultimately, the Montana Constitution. The chambers are also governed by a set of joint rules.

The origins and legal standing of legislative rules formed another debate Tuesday. Sen. Keith Regier, R-Kalispell, successfully brought an amendment to the joint rules striking "judicial decisions on the constitution" from the list of sources on which the rules are based.

Regier said he'd paged through the Montana Code of Judicial Conduct and "could not find out where the legislative branch influenced their conduct."

The change reflects a longstanding suspicion of judicial bias against conservative causes in the Montana Judiciary among certain Republicans, including Regier, who chaired the Senate Judiciary Committee last session and will do so again in 2023. Republican leadership last session formed a select committee to investigate the judiciary, though lawmakers on Tuesday voted to shutter the committee, which hasn't met in months, for the upcoming session.

Regier's amendment passed over objections from Democrats and some Republicans wary of their party's posture toward the role of case law and legal precedent.

Indeed, recent court rulings involving the Legislature weighed on the rules debate. The joint committee adopted language bolstering public oversight of free conference committees, where lawmakers can bring sweeping amendments to bills late in the session, often with little opportunity for public feedback. That was the case with Senate Bill 319, a bill that began as a campaign finance law revision and became overnight a restriction on political organizing on college campuses, among other activities. A district court judge ruled earlier this year that the bill was amended outside the scope of its original title, violating the Constitution.

Most of Tuesday's overt conflict occurred in the House Rules Committee, where Bedey, an increasingly vocal ally of the relatively moderate Conservative Solutions Caucus, opened discussion on seven amendments that generally would allow minority-party Democrats and dissenting Republicans to exert more leverage over Republican leadership. Bedey nodded to the GOP's recently won supermajority control of the Legislature as his justification.

"I represent a moderately purple district in Ravalli County, and one strong signal I get from my constituents is they expect ourselves in the Legislature to conduct ourselves with fairness to everyone," Bedey said. "Our rules must protect the rights of all legislators to be heard. If we don't do that, we're effectively stifling the 10,000 Montanans who each of us represent here in the House."

Bedey's amendments included lowering the threshold necessary to "blast" a bill that dies in committee to the floor to a simple majority vote, reining in select committees - special committees appointed by leadership to investigate specific areas of interest - and providing a process for any member to propose a new committee slate if the House rejects leadership's appointments, among others. By the end of the day, the committee took votes on and passed only three of Bedey's seven proposals.

One of the adopted amendments will allow legislators to appeal decisions by the presiding officer not to recognize them on the floor if two other lawmakers second their appeal. Another requires the House Speaker to announce interim committee appointments "no later than 10 legislative days before the scheduled 90th legislative day or 3 legislative days prior to adjournment sine die," a rule that has typically been observed in practice, but not codified.

The committee also approved a declawed version of Bedey's select committee proposal. Initially, he had wanted to relegate select committees to a purely advisory role, meaning no subpoena power and no ability to introduce legislation. In the background is a rumored push by hardline Republicans to enact a select committee on election procedures during the session.

The panel ultimately approved a version stipulating that bills heard in select committees must subsequently be referred to standing committees for a vote.

Bedey said he didn't ultimately bring several of his amendments for a vote because of feedback from other members on the rules committee, though he noted that it "remains to be seen" whether he - or another like-minded Republican - does so during the session.

"The reason I didn't bring a few of the motions forward is based upon the discussion that we had. It seems like some relevant considerations were brought forward," he said.

In other words, those proposed changes landed like a lead balloon among several other Republicans on the House Rules Committee. Bedey's amendments even provoked one of the day's few public comments, from Rep. Bob Phalen, R-Glendive, who accused Bedey of seeking to weaken the supermajority and undermine newly elected House Speaker Matt Regier, R-Kalispell.

"Empowering the minority at the expense of the majority is only acceptable in the eyes of the minority," Phalen said.