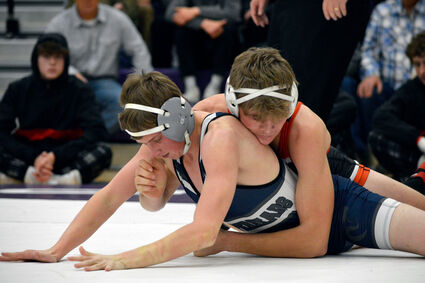 Dylan Kamps had a fantastic performance at the Whitehall Duals. Voice photo by Melissa Jenkins.

It was an incredible weekend for the Three Forks High School Wrestling team at the Whitehall Duals. The Wolves went a perfect 7-0 in duals on their way to capturing the team title at the two-day event.

"I'm very happy with the way the kids have been wrestling. I could not be happier with this team," Head Coach Nye Howey said.

Three Forks next picked up an impressive 42-36 win over the Billings West JV team, with Hungerford, Kamps, Boggus, Linville, Rogers, Hogue, and Wagner all winning by fall.

The Wolves wrapped up day one with a 78-0 win over the Havre JV squad. Fletcher, Josiah Gonzales (285), and Chase Kirkland (138) all won by fall for the Wolves.

Three Forks opened day two on Saturday with a convincing 57-15 victory over Anaconda.

Following the win over Anaconda, Howey also praised the wrestling of eighth-grader Mathias Hogue, who lost a tightly contested 4-2 match against former state champion Nate Blodnik. Howey said he had been impressed with the first-year member of the team.

In the semifinals, Three Forks defeated the host and one of the top Class B teams in the state Whitehall, 45-27.

Hogue, Wagner, Kamps, Eide, Boggus, and Rogers all won by fall, and Hungerford earned a 6-4 win. 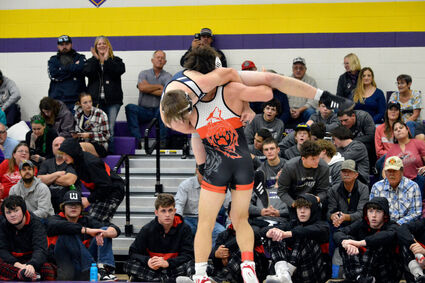 TFHS Senior Levi Wagner picks up his opponent last week during a victory at the Whitehall Duals. Voice photo by Melissa Jenkins

The Wolves won the team title with a 49-24 win over North Fremont (Idaho).

Wagner, Boggus, Linville, Rogers, and Hogue all won by fall. Hungerford won 9-0, and Gonzales picked up a 6-4 victory.

A few weeks into the season, Howey has enjoyed how his seniors have led by example on the mat in both practice and competition. He said Wagner, Kamps, Kirkland, Eide, and Linville are great teammates.

Howey also praised his coaching staff of Ace Meskimen, Ryan Henry, and Kelly Hogue for their work with the wrestlers. He also was appreciative of the support for the team.

"We have parents who are always coming and community members who support the team," he said.

Three Forks will compete Thursday in Fairfield and at the prestigious CMR Classic Friday and Saturday in Great Falls.