"One of the main things I said is that this is when it matters. The goal in Three Forks is to win the conference every year, and it starts tonight," Hauser told his team.

The Wolves listened well to the message from their head coach and picked up their first win of the season with a 50-39 road victory. One night later, Three Forks would move to 2-0 in conference play with a 56-50 home win over Big Timber.

Following the victory over Whitehall, Hauser said getting the win was huge for the team.

"With these younger kids, gaining confidence is a big thing, especially because they haven't had a lot of varsity time. To get the first conference win is huge, especially on the road against a Whitehall team that only lost two guys from last year," said Hauser. "It felt really good to win. The kids played good at times and not good at other times, but we will just keep grinding and getting better."

After taking a 10-8 lead at the end of the first quarter and up 25-20 at halftime, the Wolves would trail 34-33 going into the fourth quarter.

Hauser said after a Whitehall run, they took a time out, and the kids started to separate and bicker at each other.

"I told them that is what losing teams do, and we cannot be doing that. It is a game of runs, handle it, and it is our turn to make a run. They responded well," Hauser said. 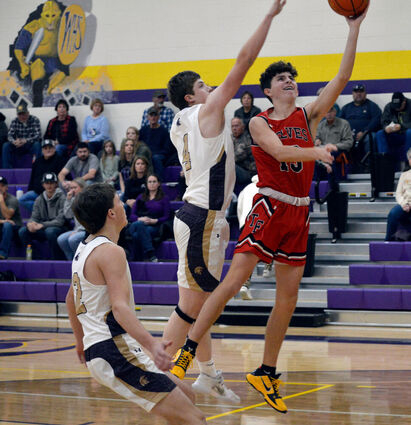 Dylan Swenson takes it to the basket in a 50-39 win at Whitehall. Voice photo by Jack H. Smith

Three Forks would utilize another big run Saturday on their way to the six-point victory.

"We had a great fourth quarter. We started pressing them and gave them fits. Our defense won us the game. It was awesome to see the kids battle back. We were down 43-34 with six minutes remaining in the fourth. Showed a lot of grit not giving up and battling back," Hauser said.

Swenson had a big night for Three Forks with 16 points, and Feddes and Williams also had double figures with 11. Van Vleet finished with nine, Tesoro had five, and Hayder had four points.

The Wolves will wrap up the 2022 portion of their schedule on December 20 at home against Boulder and play on January 6 at Manhattan.