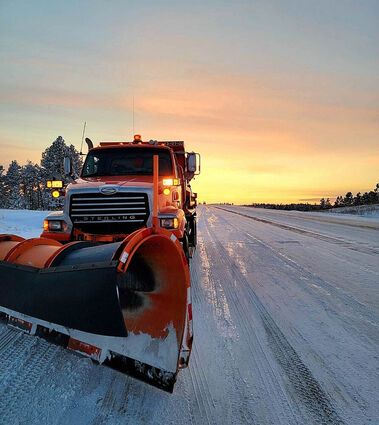 The Montana Department of Transportation has added green lights to their snowplows. MDT Photo

Many Treasure State residents might have noticed green lights added to Montana Department of Transportation snowplows during the recent winter storms.

With the average number of 24 MDT snowplows hit by vehicles a year, already eight this winter, officials started to look at ways to make plows more visible and continue to operate and keep drivers safe.

According to Walt Kerttula, Equipment Bureau Chief in the MDT Maintenance Division, the background behind the new lights started with looking at other states using colored lights on their plows -- some green, some blue, and some red.

After asking the Montana State Legislature to change the state law to allow any colors, Kerttula said law enforcement asked them not to use blue.

"They wanted to reserve that for them, which makes sense, and people would know that is law enforcement," he said.

Looking at the science about different colors, Kerttula said when they examined green, it was the color the human eye picks up the fastest.

"We looked at the research, and it showed it (green) shines through a snow cloud or the fog much better than other colors. So, we went to the transportation commission and got their approval, got approval from our agency, the Legislature passed a bill, and we started putting green lights on the snowplows," he said.

Since the implementation of the lights, there have been mixed reviews from the public.

"Some have said they really like it, and they can see the plows and thanked us for it. Others said they don't like it and it's too bright or 'green means go'," said Kerttula. "But we wanted to keep our snowplow drivers safer. We average about 24 snowplows hits a year. That's somebody hitting our snowplows as they are actively working. So, we want to try to reduce that number, keep our guys safe, keep the public safe so they can actually see those plows and know they there. That was the idea behind it. They see a green and amber flashing light; they know it's an MDT Plow out on the road doing its work."

Kerttula added when a plow is hit, it has to be taken off the road and immediately fixed. This has become a big issue during big storms, especially with staffing shortages.

"It takes one of our snowplows off the road for varying amounts of time, depending on how bad the damage is. It's a problem for us, especially in a winter storm, to have a plow not available to use...With a lack of drivers, that is one more plow off the road," he said.

Regarding general guidelines for sharing the roads with plows, the MDT asks those traveling to "Not Crowd the Plow."

"There is limited visibility in those plows. They are concentrating on the roads, so don't assume they can see you if you are behind them. Stay back and maintain a safe distance behind the plow. They might be spreading sand or deicer on the road, or they might be moving snow. That's their focus," Kerttula said.

The MDT also asks for patience from those sharing the roads with plows.

"Don't pass if there is a whiteout or snow cloud. The driver is going to pull over in a bit when it's safer for people to drive. We always tell people who are behind the plow that road has been treated. In front of the plow, you don't know what there is. Slow down when you see the plow and give them a chance to do their work," Kerttula said.